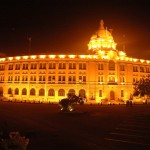 I visited Karachi recently i.e. in January 2013. What did I find? I was literally shocked. It is like a war zone. My wife’s relatives also live in Malir Cant. When we went to visit them, we were stopped. There is a check point. We had to go to an office and fill up a form. We were then given a paper which we showed at checkpoint and then were allowed to enter the area. It was just like visiting another country.

Every country has big bosses or multi-national companies or firms who literally control the Governments. They are discreet. They don’t show off. You visit Washington or London [where I live]. I go from place to place to visit my friends, etc. We don’t have ever have to fill up any forms anywhere. This is true of major cities of the world.

Pakistan is now virtually occupied country. Occupied by Pakistan Army. They run businesses, factories and virtually have their own prisons. Recently Chief Justice of Pakistan asked ISI to produce the people they are holding. – about 6,000 persons. I refer to what is known as “missing persons”. The reply was that they are a threat to Pakistan’s safety. The question was raised as to why they are not put on trial. NO ANSWER. This is the same tactic employed by British and American Governments. In UK there is a prison called Belmarsh Prison. People are just kept their without any trials and they don’t know how long they will be there for. In USA, there is a prison called Gautanamo Bay where people are kept without trials.
There are encouraging points in Pakistan.People are not silent.They raise their voices in various ways.When I was there, Pakistan Army killed 102 people in Quetta on 10 January 2013. There was a sit in by the people with 102 bodies until, the government caved in i.e. Balochistan Government was dismissed and Governor rule was imposed. Shia leaders publicly questioned Pakistan Army chief General AshfaqKayani. http://dawn.com/2013/01/11/shia-leaders-question-army-chief-over-quetta-carnage/
Pakistan Army is making attempts to divide the country so that they can rule.“Divide and rule” is their policy.They kill one community members and blame on other.They created and support MQM who are carrying on activities threatening peace and tranquility of places they rule with impunity.This policy has literally failed.People in Pakistan are not divided.Demonstrations occur on a daily basis against injustices.In Northern Pakistan a war is going on against Pakistan Army which is engaged in “war on terror” initiated by USA for its own interest.
Now we hear the sound of peace talks with Taliban.Why now?Because the Army cannot take the casualties for too long. Pakistan Army soldiers are killed frequently. Recently 13 soldiers were killed [Dawn 11/1/2013]
*If we want peace.*
People should demand that Pakistan closes American bases in the country.These bases are used to plant bombs and kill people in the country.American personnel should be expelled.They use their diplomatic cover to engage in espionage activities.We should look to Iran which does not any diplomatic links with USA.As a result, there is peace and tranquility in the country.
I only hope that the Army just realizes that Pakistan belongs to the people of Pakistan and they should not try to control its politics and economics.They can live happily as citizens of the country and not as masters.Will they listen?

Between The Deen and Halloween

Does Imran know about Civil Disobedience?