The growing menace of counterfeit products has become a serious problem for consumers and producers, so the country’s law enforcement agencies must acquire the ability to investigate this white-collar crime. Laws do exist to curb this menace, but the law enforcement agencies do not have adequate knowledge to distinguish between the fake and genuine products.

The proliferation of fake and modified goods is not only hurting the consumers and genuine producers of goods, the menace is also adversely affecting the national economy, government revenues and thereby public-sector sociology-economic programmes. This was stated by Umar Ghauri Chairman TCEP ‘The Consumers Eye Pakistan’ in his keynote address in Seminar “combating counterfeiting” on occasion of World Anti Counterfeiting Day 2014 in a local Hotel Karachi. 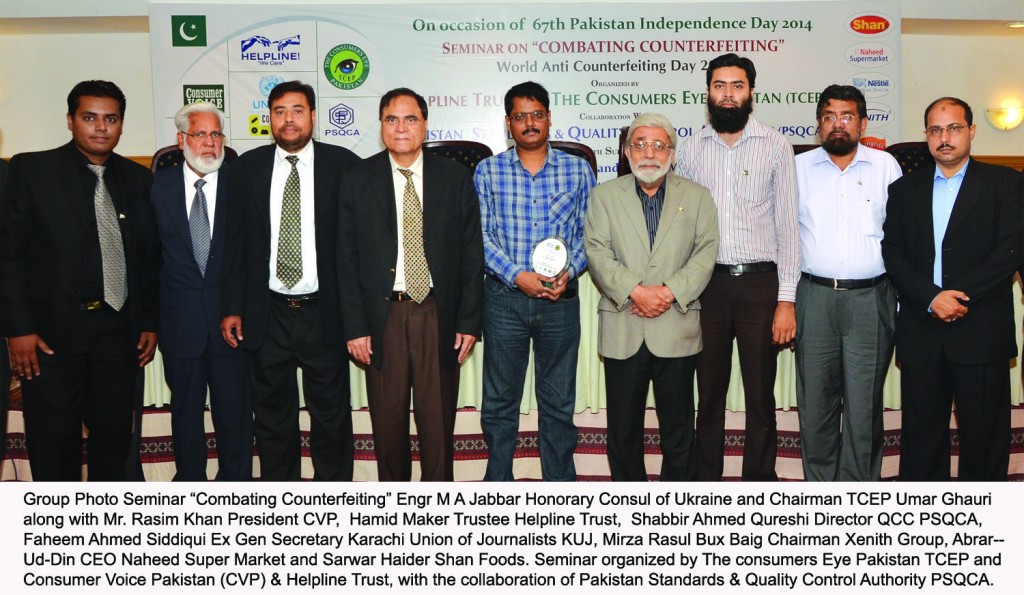 Chairman TCEP disclosed that huge amount of ill-gotten money invested by unscrupulous elements to raise production of their goods has made it difficult to detect the genuineness. He said that according to an international report “65% of the goods including live saving drugs being sold in the country are fake, which is harming the consumers, producers and our economy”. He empathized that there is a critical need to combat counterfeiting and piracy, which have also been found linked to public safety issues.

Mr. Rasim Khan, President, Consumers Voice Pakistan (CVP) in his speech said that in the absence of counterfeit specific laws, special courts and delay in justice are hampering efforts to curb the spread of counterfeit goods in the country. A strict and forceful enforcement of existing laws is needed to control the proliferation of counterfeit products which put human lives at risk.

Chairman CVP, Rasim Khan said that our markets are flooded with counterfeit products being sold without fear of punishment. Some manufacturers use non-food grade plastics and colors in their products, which cause cancer. While other manufacturers use old rusted tins and plastic bottles for packing cooking oils and bottled water. He stressed the need for counterfeit specific laws and courts in Pakistan. He also demands consumer Courts in the province of Sindh as all provinces. He appreciated those manufactures and retailers who are in fore front in combating counterfeiting.

Engr. M.A. Jabbar Honorary Consul of Ukraine, former Vice President of FPCCI & Chairman SITE Association of Industry and member Board of Directors PSQCA in his Chief Guest speech said that Pakistan ranks amongst those countries of the world where fake goods and adulterated foodstuffs are sold openly in markets. There is no formal research or study present on the size of counterfeit drug market in Pakistan; one cannot say how big this market exactly is. Counterfeiting is believed to cost the government over Rs12 billion a year, so the government has to play its part and take this issue seriously.

Mr. Hamid Maker founder trustee of Helpline Trust in his opening Remarks asked for strict Consumer Protection Law to combat counterfeiting and provide protection to industry as well as consumers. Counterfeit products have become a global menace and are manufactured and marketed with only one objective in mind, to cut costs by ignoring quality and safety, cheat consumers and make unlawful profits. And if we allow this illegal business to carry on unchecked, then we too are equally guilty of this crime. He stressed the need for counterfeit specific laws and courts in Pakistan. He also demands consumer Courts in the province of Sindh.

Mr. Faheem Ahmed Siddiqui of GEO FIR, Ex Gen Secretary of Karachi Union of Journalists (KUJ) said that media’s role is crucial in raising awareness about the menace of counterfeit and piracy affecting the rights of consumers and investors. He urged the public and private sectors to come closer and share their opinions and expertise to devise means required to curb the violation of right of intellectual property (IPR). He said that one of the hallmarks of the progressive society was the protection of rights of creators, artists, writers and investors in fostering creativity and innovation. He said that the mass media is playing a positive and effective role in creating awareness and stimulating debate.

Director General Pakistan Standards & Quality Control Authority (PSQCA) in his message termed seminar” Combating Counterfeiting” a step in the right direction to aware people about the effects of counterfeiting. Pakistan Standards & Quality Control Authority is fully aware about the substandard counterfeit products. I assure you that PSQCA will not let counterfeiters free or unchecked in Pakistan. He said that PSQCA Task force teams along with equipped Mobile testing laboratory and consumer NGO’s representatives, regularly visiting Markets, Stores, factories and open bazaars, to combat unregistered, Counterfeit products.

The speakers had stated that counterfeit goods including food and medicine products are not only a serious health hazard, but they cheat the government of revenue, infringe on intellectual property rights of the original manufacturer, have a negative effect on investment and tarnish the image of Pakistan. They highlighted the harm that they were doing to the economy and to the health of the consumers and emphasized the need for action against the dangers of counterfeit products including food and life saving drugs in Pakistan.