ISLAMABAD: Famous actor Veena Malik returned to Pakistan for the first time after her marriage, complete with conservative garb and claims of having “matured” 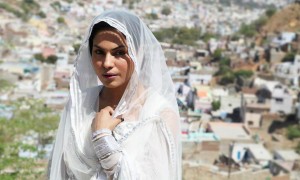 Upon her arrival at the Benazir Bhutto International airport in Islamabad, Veena said the country had given a lot to her, and she had come back as a “matured girl” as it was time to give back to the country.

She did not confirm if she would return to the showbiz industry, but the star, who was visibly in an emotional state, said that whatever she would do from now on, be it showbiz related or social work, would be inside Pakistan only.

The actor, known to make headlines and court controversy, has returned following a long stint in neighbouring India’s Bollywood industry and had claimed to have undergone “a change within” after marrying singer and businessman Asad Bashir Khan.

Recently, the actor had also caused a stir with her apparently anti-Indian remarks which were taken as an indication of her return to her native country.

The star entered a controversy in 2011 when semi-nude photos of her were published in Indian magazine FHM with the initials of Pakistan’s premier intelligence agency appearing on her arm.

She had sued the magazine for damages claiming the published image had been morphed without her knowledge.

The actor made her debut in 2000 and since then has appeared in a number of Pakistani films and tv programmes.

After moving to India she performed in many commercially successful movies including, Daal mein kuch kaala hai, Zindagiu 50-50, Super model and Kannada.

She also appeared in a season of Indian reality show “Big Boss.”