ACTOR and comedian Tracy Morgan is in intensive care after the limousine bus he was riding in was involved in a multi-vehicle accident on the New Jersey Turnpike that left one dead, state police said.

The vehicle carrying the former Saturday Night Live and 30 Rock cast member and six others was involved in a six-vehicle accident on the turnpike near Cranbury Township at about 1am, Sgt. 1st Class Greg Williams told The Associated Press. 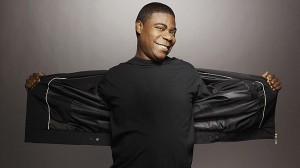 One person died in the crash, which occurred in the northbound lanes of the turnpike near mile marker 71.5, Mr Williams said. There was no immediate word on other injuries from the accident.

A spokesman at Robert Wood Johnson University Hospital Centre in New Brunswick, New Jersey, says a patient named Tracy Morgan is in critical condition there, but he wouldn’t confirm it was the actor.

It wasn’t immediately clear what caused the pileup.

Morgan performed comedy stand-up Friday night at Dover Downs Hotel & Casino in Delaware. His scheduled appearance at the Fillmore Charlotte in North Carolina on Saturday night has been cancelled..

The 45-year-old New York City native joined SNL in 1996 and was on the sketch-comedy program for seven years before leaving to star in The Tracy Morgan Show in 2003. That show lasted just one season.

In 2006, Morgan found a long-running role as outrageous star Tracy Jordan on 30 Rock, which was created by SNL co-star Tina Fey.

Morgan grew up fatherless, one of five siblings, in a blighted section of Brooklyn, where he helped raise and support the family.

He has three children with his first wife of 23 years, Sabina, and a fourth child with his fiance, model Megan Wollover.

He once called his gift for being funny “a defence mechanism” for his miserable circumstances.

As a teen, he started doing comedy on the streets to supplement the family’s welfare income.

He had a kidney transplant in late 2010.

The New Jersey Turnpike was closed for more than five hours after the crash.