SEOUL: A film casting a nostalgic eye on a former left-leaning president has become a box office phenomenon in South Korea, powered by what some see as growing discontent with Seoul’s conservative political landscape. 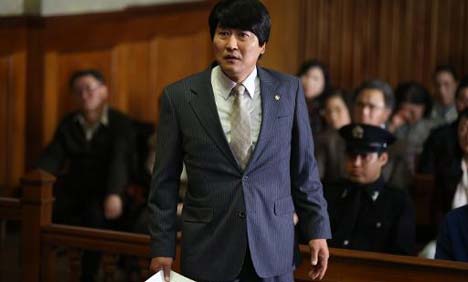 As President Park Geun-Hye looked back this week on her first year in office, moviegoers have been looking further back to the early 1980s — a period of political upheaval that provides the setting for “The Attorney.”

The film tells the story of an opportunistic tax attorney who throws away personal ambitions to defend a group of innocent students falsely accused of sedition.

The storyline is taken from actual events and the lead character is clearly based on the late Roh Moo-Hyun, who became a human-rights advocate and later South Korea’s president.

Since its December 18 release, the film has been seen by more than 11 million people — more than 20 percent of the population.

In just 33 days, it became only the tenth South Korean movie to sell 10 million tickets.

“The Attorney” features one of South Korea’s best-known actors in the title role, and the storyline of the reformed lawyer representing the underdog against the establishment has a classic populist appeal.

But critics say the film has also successfully tapped into simmering discontent, and nostalgia for a period before the country’s booming economy spawned a more materialist culture.

Roh Moo-Hyun left a divided legacy. A liberal firebrand with a common touch, he served as president from 2003 to 2008, before jumping to his death a year later as a corruption probe closed in on his family.

Roh’s approval rating was only 11 percent during his final year in office, but his suicide came as a profound shock.

The rural village where the late president grew up — and which now houses his grave — has always been popular but after the film came out, the number of monthly visitors surged more than 50 percent and topped 93,000 in January.

The background of “The Attorney” is the 1981 “Burim Case” in which 22 students and workers were arrested on trumped-up charges.

It was widely seen as an attempt by strongman Chun Doo-Hwan, who had seized power in a coup the year before, to discredit the pro-democracy movement.

Roh was one of the defence lawyers at the trial. After signing confessions under torture, 19 of the group were jailed for up to six years.

Roh’s presidency marked the end of a 10-year experiment with liberal leadership — a period best known for the “Sunshine Policy” with North Korea that produced two historic summits.

He was replaced by the conservative Lee Myung-Bak who was in turn followed in 2013 by the incumbent Park Geun-Hye.

Park is the daughter of late military strongman Park Chung-Hee whose iron-fisted rule through the 1960s and 70s still bitterly divides Koreans.

Although Park has enjoyed high approval ratings since taking office, some see her style as a throwback to an authoritarian past, and there was widespread disquiet over intelligence agency meddling in the 2012 presidential election.

A slowing economy has highlighted disparities thrown up by the boom years, fuelling calls for economic and social reform.

It is in this climate that “The Attorney” with its crusading, idealistic message has struck a chord.

“A movie like this is usually a hard sell, but the current government laid out a perfect platform for “The Attorney” to become a smash hit,” said Chin Jung-Kwon, a noted liberal commentator.

Moon Jae-In, the former Roh aide who ran against Park in the 2012 presidential poll, rented a whole movie theater to watch the film with supporters and some of the real-life Burim Case defendants.

Park’s ruling Saenuri Party dismissed it as a “mere work of fiction”.

Director Yang Woo-Seok insists he had no particular agenda but acknowledged that the film had been well timed.

“The box office success we’re seeing now can’t be explained simply with the quality of the movie itself,” Yang told AFP.

“I think a sense of political injustice prevails among many South Koreans, who saw in our film a way to vent their frustration,” he said.

Nostalgia for Roh Moo-Hyun was also credited with fuelling the success of 2012’s “Gwanghae” — a period drama that became the fourth-highest-grossing Korean film.

Many drew parallels between Roh and the lead character — a humble acrobat who stands in for a Joseon dynasty king.

Other celluloid efforts have been intentionally polemical, including “Namyeong-dong 1985” — a 2012 movie which details the torture of a real-life democracy activist in 1985.

A recent editorial in the conservative Chosun Ilbo newspaper said films like “The Attorney” were evidence of a near-universal “liberal bias” in cultural circles.

“Some liberal moviemakers, encouraged by the success of ‘The Attorney,’ may be busy honing new scenarios now — with the 2017 presidential election in mind,” the editorial warned.