San Antonio take early lead in NBA Finals with a 110-95 win over the Miami Heat despite an AC failure at the venue.

San Antonio beat the Miami Heat 110-95 in Game 1 of the NBA Finals and beat the sweltering heat inside an AT&T Center that suffered an air conditioning failure. 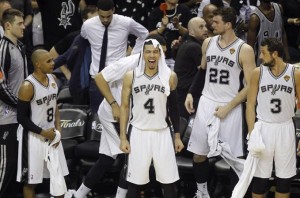 The extreme temperatures contributed to LeBron James going down with cramp in the closing minutes, keeping him out of the game as San Antontio pulled away late.

Tim Duncan had 21 points and 10 rebounds, while Manu Ginobili had 16 points and 11 assists, and Tony Parker added 19 points and eight assists for the Spurs, who shot 59 percent and improved to six for six in the opening game of NBA Finals series.

James finished with 25 points but played only 33 minutes, and Miami was outscored 36-17 in the fourth quarter.

Dwyane Wade scored 19 points and Chris Bosh had 18 for the Heat, who wilted in temperatures that soared past 32 degrees (90F) in the second half.

“It was tough on both teams,” Spurs coach Gregg Popovich said. “They were pretty dead. We tried to get guys in and out. … It was really hot out there.”

James, who had cramping issues two years ago in the finals, had to ask for a break in the fourth quarter and was getting treatment during a 15-4 Spurs run that turned around the game.

He came back in and made a basket that cut it to two points with about four minutes left, but immediately put his hand up to signal he was finished. He lingered at the baseline and eventually had to be carried to the bench.

Danny Green followed with three-pointer to trigger what became a 16-3 run to end the game.

“It felt like a punch in the gut when you see your leader limping to bench like that. But we still had a chance after that,” Heat coach Erik Spoelstra said.