The much-awaited trailer of upcoming Bollywood action-comedy thriller, Happy New Year, is out – and as always, ‘King Khan’ rocks! 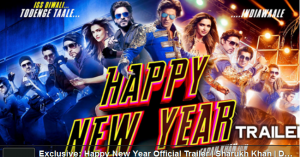 After hits like Chennai Express and Om Shanti Om, we’re very excited to see the power couple, Shahrukh and Deepika back together, with chemistry that appears as fresh as ever.

Directed by Farah Khan, the film promises to be very colorful and comedic with lots of dance and action.

The film, which is slated to release on Diwali (October 23), has turned some of Dubai busiest spots – the iconic Atlantis hotel, Dubai Mall and Terminal 3 of Dubai Airport – into extravagant movie sets.

The story however may disappointment some, as it seems like a rip off of last year’s Hollywood hit film, Now You See Me, where four magicians plan a bank robbery for their final performance. But as Shahrukh Khan says in the end, “Yeh toh sirf trailer hai, picture abhi baki hai meray dost”.

The film is also extensively using social media as a major platform for promotion. The film’s poster has already gone viral, and this is the first time a Bollywood film is pushing its trailer via Whats App to Indian fans.

The stars of the film have also changed their names on Twitter to those of their characters in the film.

By posting #HNY or #HNYTrailer on Twitter, fans could receive the film’s trailer personally from the stars.