MOSCOW: Tatyana Samoilova, the Soviet-era movie star best known for her roles in “The Cranes are Flying” and “Anna Karenina”, died on Monday aged 80. 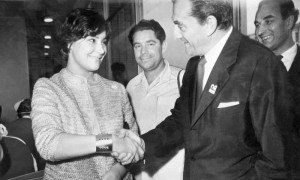 Samoilova shot to international fame with the leading role of Veronika in “The Cranes are Flying”, a tragic story of love cut short by the outbreak of World War II.

Directed by Mikhail Kalatozov, the movie won the Palme d’Or at the 1958 Cannes Film Festival, the first and only Russian film to receive that award.

Internationally, the almond-eyed, dark-haired beauty was perhaps best known for her title role in a 1967 Soviet-made version of “Anna Karenina”.