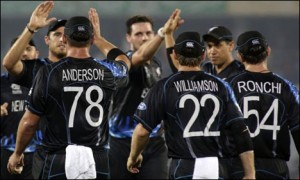 South Africa regular captain Faf Du Plessis returned to the squad after recovering from a hamstring injury. To accommodate him in the side, Farhaan Behardien was left out. The rest of the team at Zahur Ahmed Chowdhury Stadium remained unchanged.

New Zealand fielded the same squad that won the first match against England.

South Africa had lost its first match to Sri Lanka by five runs in the last over.