Rafael Nadal’s 41-match winning streak at the Barcelona Open is ended with a loss to countryman Nicolas Almagro.

Misfiring Rafa Nadal crashed out of the Barcelona Open at the hands of fellow Spaniard Nicolas Almagro who avenged last year’s final defeat by winning their quarter-final 2-6 7-6 (7-5) 6-4. 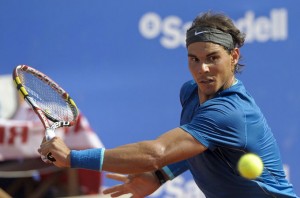 The world number one also went out in the last eight of the Monte Carlo Masters last week, losing to compatriot David Ferrer.

Top seed Nadal showed some form in the first set against Almagro and then lost his way.

Both players broke serve in the opening two games, with Almagro hitting some deadly backhands but also racking up 15 unforced errors in the set.

The second set was more even and it went to a tiebreak with Almagro, who had never beaten his countryman in 10 previous attempts, coming out on top.

The decider was scrappy and contained four consecutive breaks of serve before the sixth seed clinched victory.

“I had a lot of chances in the second set when I had the match more controlled but I didn’t take them,” said Nadal.

“As the match went on I was less calm but I still had openings in the third set at 3-1 and at 4-4 which I didn’t take. This is tennis and you just have to keep going.”

Nadal will aim to stretch his record of French Open successes to nine titles when the second major of the year begins at Roland Garros on 25 May.

The result is a big boost for Almagro who has had an injury-plagued year. He now faces Santiago Giraldo or Philipp Kohlschreiber in the semi-finals.