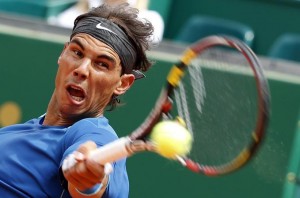 Rafa Nadal, Roger Federer and Novak Djokovic demonstrated their superior class on clay as they eased into the quarter-finals of the Monte Carlo Masters.

The victory makes the Spaniard only the 11th player in history to notch up 300 tour-level clay-court wins. He next faces sixth-seeded David Ferrer who beat Russia’s Grigor Dimitrov 6-4, 6-2.

Fourth seed Federer recovered from a break in the first set to beat Czech Lukas Rosol 6-4 6-1.

Champion Djokovic dropped just one game as he demolished Spain’s Pablo Carreno Busta 6-0 6-1 to continue his title defence in the principality.