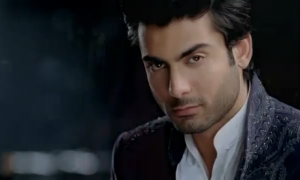 According to Hindustan Times, Fawad has claimed he is not yet used to being so admired.

“I blush … that’s the effect all the affection has on me,” said Fawad.

He further confessed that his idea of romance is old-school.

“I’m quite old-school when it comes to relationships.”

“I proposed to my wife (Sadaf) when I was 17, and she was all of 16. It may’ve been unfair to her, but I was very clear that I wanted to be with her forever … I told her, ‘I want to be your husband and want to grow old with you. I love you now and I’ll love you forever.’ She was the first (love) in my life and she’ll be the only one.”

The 33-year-old actor is also starring alongside Sonam Kapoor in his Bollywood debut Khoobsoorat, which is set to release on September 19.

“It’s an honour to be seen as a cultural ambassador of sorts, especially by actors who are immensely talented … I’m happy that people are seeing my entry as a harbinger of positive change”.