WASHINGTON: Angelina Jolie’s “Maleficent,” the modern retelling of the life of Sleeping Beauty’s arch-nemesis, worked its magic on audiences over the weekend, debuting at the top of the North American box office, industry estimates showed Sunday.

The wicked witch who has haunted generations of children raked in $70 million, according to industry tracker Exhibitor Relations, in a flick that not only casts Jolie in the title role, but was also produced by the megastar. 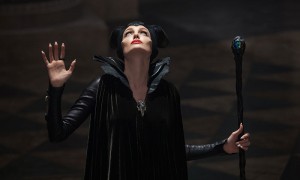 Meanwhile, “X-Men: Days of Future Past,” a time-bending movie that brought in $110.6 million over Memorial Day weekend, sank to second place with only $32.6 million in its second weekend out.

And cowboy comedy “A Million Ways to Die in the West,” which stars comedian Seth MacFarlane as a sheep farmer in 1880s Arizona, debuted in third place with $17.1 million.

The weekend was big for classic villains and monsters, with “Godzilla”landing in fourth place with $12.2 million.

The movie features “Breaking Bad” star Bryan Cranston as a tortured Japanese-speaking scientist battling to save humanity from the looming creature.

“Neighbors” starring Seth Rogen and Rose Byrne as a couple living next door to a raucous fraternity house, earned $7.7 million and landed in sixth.

The movie tells the true story of a Major League Baseball agent who goes to India to find the next big thing among cricket players.

Foodie flick “Chef,” the story of a fictitious, restless chef who decides to embark on a food-truck adventure remained in ninth place with $2.0 million.

And rounding out the top ten with $1.4 million was “The Other Woman,” a romantic comedy starring Cameron Diaz.