Two Steven Gerrard penalties give Liverpool a 2-1 win, while Everton beat Arsenal 3-0 in the Premier League. 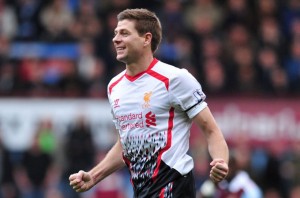 Steven Gerrard scored twice from the penalty spot as Liverpool stretched their  Premier League winning streak to nine matches and returned to the top of the table with a 2-1 win at West Ham.
Gerrard put his side ahead in the 44th minute with his first penalty after James Tomkins handled a Luis Suarez cross at close-range.

West Ham equalised a minute later with a controversial goal from Guy Demel after Andy Carroll appeared to foul Liverpool keeper Simon Mignolet in the build-up.

Referee Anthony Taylor had a long discussion with his assistant before allowing the goal to stand, but there was also controversy surrounding Liverpool’s next goal.

Taylor ruled that West Ham keeper Adrian brought down Jon Flanagan although TV replays showed the goalkeeper got a hand to the ball first.

Gerrard, who also scored two penalties against Manchester United last month, made no mistake with his second spot kick, blasting the ball past Adrian into the corner of the net.

Everton crushed a woeful Arsenal side 3-0 at Goodison Park to boost their chances of a top four finish and a possible place in next season’s Champions League for the first time in nine seasons.

Everton’s sixth successive Premier League win meant that although they stayed in fifth place, one behind Arsenal, they are only a point behind the Gunners with a match in hand.

Goals from Steven Naismith, a superb solo effort from Romelu Lukaku and a third when a Kevin Mirallas shot went in off Arsenal’s former Everton midfielder Mikel Arteta for an own goal, sent Arsenal crashing to another heavy defeat on Merseyside two months after they lost 5-1 at Liverpool.

Arsenal last failed to play in the Champions League in 1997-98 but on this form their record is under serious threat.

Liverpool top with 74 points from 33 matches, two ahead of Chelsea who have also played 33.

Manchester City, who play Liverpool next week, have 70 points and two matches in hand, followed by Arsenal on 64 from 33 and Everton 63 from 32.