The big night of Golden Globe 2017 belonged to “La La Land,” whose seven wins set a new record for the most Golden Globes by a single movie.

“I’m in a daze now officially,” said the force behind “La La Land,” Damien Chazelle, 31, as he accepted the directing award. Emma Stone said in accepting the award for best actress in a musical or comedy, “I think that hope and creativity are two of the most important things in the world, and that’s what this movie is about.”

The other big movie award went to low-budget “Moonlight,” about a young boy growing up in an impoverished neighborhood of Miami, which was named best drama. “The movie touches people because they see the authenticity that we put into it. We weren’t trying to do anything other than tell our story,” said director Barry Jenkins.

Casey Affleck, star of “Manchester by the Sea,” won best drama actor for his role as a man riven by grief, while Viola Davis won best supporting actress for playing a downtrodden wife in the African-American family drama “Fences”.

In a surprise result, British actor Aaron Taylor-Johnson was named best supporting actor for his role in Nocturnal Animals – a prize that had been widely expected to go to Mahershala Ali for Moonlight.

Zootopia was named best animated feature film at Sunday’s ceremony, which was hosted by Jimmy Fallon.

‘The Crown’ took home best TV drama and best actress in a TV drama for Claire Foy, while Tom Hiddleston, Olivia Colman and Hugh Laurie all picked up acting awards for their roles in ‘The Night Manager’, an adaptation of John Le Carré’s novel

“The Crown” beat out “Stranger Things,” also from Netflix; “Westworld,” the HBO series that practically requires a Ph.D. to understand it; NBC’s feel-good “This Is Us”; and HBO’s “Game of Thrones.”

The evening’s most dramatic moments came from 67-year-old Streep, the most respected actress of her generation, while accepting her lifetime achievement award.

Meryl Streep delivered an anti-Donald Trump speech while accepting the prestigious Cecil B. DeMille Award at the 2017 Golden Globe Awards.

Streep referred to Trump’s mocking of a disabled reporter and said: “Disrespect invites disrespect, violence incites violence. And when the powerful use their position to bully others we all lose.”

“Take your broken heart, make it into art,” she concluded her speech, quoting Carrie Fisher. 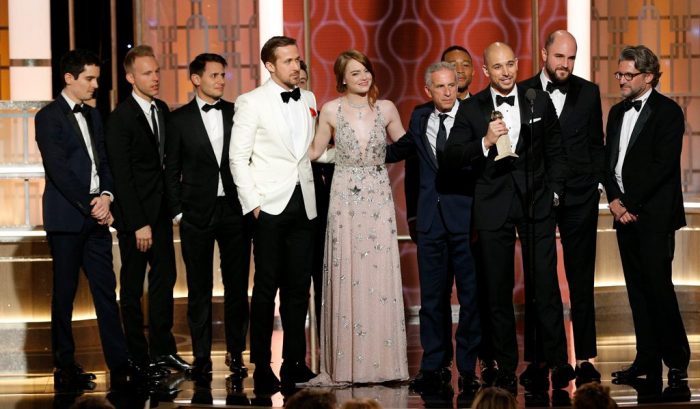