Uruguay striker Luis Suarez to undergo surgery that could take 15-20 days to recover from in time for Brazil 2014. 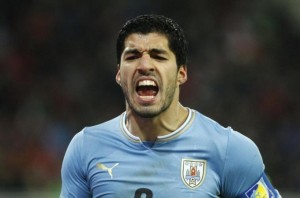 Uruguay striker Luis Suarez is to have surgery on his knee on Thursday morning, just over three weeks before the start of the World Cup, according to local media reports.

Suarez helped Uruguay to fourth place at the last World Cup in South Africa four years ago and was expected to play a key role in the country’s campaign at the June 12-July 13 tournament in Brazil.

According to a report on the website of Uruguayan TV station Tenfield, the 27-year-old Liverpool striker had an MRI scan on Wednesday which revealed damage to the meniscus in the knee with the team doctor deciding surgery was necessary.

Recovery from such arthroscopic surgery takes from 15 to 20 days, according to the report, leaving Suarez little room for manoeuvre before Uruguay play their first match against Costa Rica in Fortaleza on June 14.