So many things were shocking about Brad Pitt getting punched in the face by a deranged prankster at the Los Angeles premiere of Maleficent on May 28. The brazen, senseless hostility of the act, for one. Not to mention that the same self-described “j 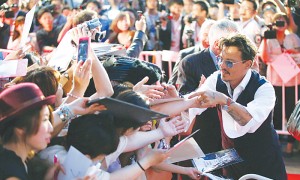 ournalist” had recently pulled another stunt at the Cannes Film Festival, when he crawled under a full-skirted gown worn by actress America Ferrera.

The one thing that wasn’t shocking about the assault Pitt suffered was that his fiancé, Angelina Jolie, announced just a few days later that she had no intention of increasing security when she and Pitt are on the hustings meeting fans. Calling Pitt’s assailant “an exception to the rule”, she told the Associated Press, “Most fans are just wonderful. We’ve had a wonderful experience over the years, and we’re very grateful for their support, and it will not change the way we behave.”

Unlike those publicity-shy hothouse flowers who make an artistically pure point of shunning red-carpet glad-handing, Jolie and Pitt have perfected the art of first-person fan management, a level of public engagement that goes much deeper than the easy smile-and-wave from a safe distance. Cynics might dismiss working the red carpet as the much-needed fix of attention seekers and adoration-addicted narcissists. But, when practised with integrity, stars’ interactions with their fans transcend mere psychology or public relations, and enter the realm of serious, even spiritual, vocation.

In Jolie’s case, I’ve seen first-hand how she meets and treats her fans, and can attest to a devotion that isn’t just steadfast on her admirers’ part, but mutual. At Cannes a few years ago, she accompanied Pitt to the premiere of The Tree of Life, there making its world premiere. As I watched from a nearby balcony Jolie, bounded up and down the rope line like a headstrong colt just about to win the Triple Crown — shaking hands, signing autographs and stopping for an odd snapshot or two.

Pitt joined her, showing similar good sportsmanship with the crush of screaming cine-tourists, many of whom had been standing in the hot Riviera sun for hours just to catch a glimpse of celebrity skin. But when Pitt joined his castmates for photo ops, Jolie stayed behind, working the rope line with high spirits and unreserved vigour that seemed to increase exponentially with each encounter.

These small connections, steadily accruing into an overwhelming one, were extraordinary — even moving — to witness. And I’d seen virtually the same thing just two days before, when Johnny Depp, who exhibited similar patience and goodwill just before the debut of Pirates of the Caribbean: On Stranger Tides. It reminded me of watching Bill Clinton in action, and how he seems to bestow and derive life-giving force with each smile, handshake and spontaneous hug.

In Depp’s case, I happened to have crossed paths with him earlier that day, when he was quietly hanging with friends at Hotel du Cap. At that moment, he had pulled down the invisible veil that through body language, facial expression and a practised, laser-like stare into the middle distance, gave every oncoming stranger fair warning: do not disturb.

But when he was “on” later that afternoon, all the concentration that had gone into telling the world to go away was now letting it in, and as he made his way up and down rope line, happily responding to endless requests for a signature, a smile, or just a glance in someone’s direction, he genuinely looked like there was no place he’d rather be.

Jolie reflected that same sense of presence and reluctance to leave. And that, I think, explains why each of them is more than just a fine actor, but a global superstar. They understand, better than some of their I’m-an-artist-don’t-touch-me peers, the transactional nature of stardom. A contract between fan and celebrity that keeps both afloat — one on a cloud of borrowed glamour and proximate fame, the other on intangible social capital that allows the audience to forgive even the worst flops, gaffes and missteps.

But at its best, there’s more to the red carpet than just a utilitarian work ethic. What defines great stars, other than talent, on-screen charisma and physical beauty, is that they seem supremely comfortable in a situation most humans would find grotesque or invasive or stupidly superficial — or, as Pitt’s recent experience showed, even physically threatening.

What I saw when Jolie and Depp tackled those rope lines was the commitment, transparency and willingness to be vulnerable that they’ve brought to their finest performances. They were 100 per cent present, focusing on those outside themselves and cheerfully giving of their time, energy and selves. So many movie fans gobble up news of how stars are just like us. Once in a while it’s worth asking how we can be more like them.