LONDON: From its birth in post-war Florence through to Milan’s modern-day creations, a new London show is celebrating the glory days of the “Made in Italy” brand, which today is facing an uncertain future. 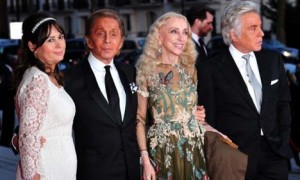 Spectacular gowns and accessories from top designers and forgotten brands showcase the craftsmanship and style that helped rebuild Italy and its global reputation after World War II.

The exhibition at the Victoria and Albert Museum is entitled “The Glamour of Italian Fashion 1945-2014”, but it has a nostalgic air, a reminder of how Italy’s standing in the fashion world has declined.

The marketing of Italy as the home of fashion began at the time of the Marshall Plan, the US aid package that helped rebuild parts of Europe destroyed and demoralised by war.

With the vision of charismatic businessman Giovanni Battista Giorgini, the funds helped Italian fashion play a key role in national reconstruction – and give Paris a run for its money.

Giorgini succeeded in attracting international buyers, including US department stores, and organised the first major show in February 1951, where models sporting elegant dresses and casual beach wear worked the catwalk at his Florence home.

“The fact that Giorgini convinced these buyers to come and add Florence after Paris on their fashion route really brought the international press and buying power to Italy for the first time,” explained exhibition curator Sonnet Stanfill.

Italy’s international reputation for style was ingrained by the semi-mythical “Sala Bianca” shows, held in Florence’s sumptious Palazzo Pitti and captured on black and white film.

Among those early designers, Emilio Pucci is the only brand currently shown on the runway.

Others disappeared into obscurity, including Vanna and Emilio Schuberth, who is represented at the London show by a stunning strapless robe in various shades of pink.

Cinema and its glamorous stars served as a unique shop window for Italian designers, thanks to the many movies filmed in the Cinecitta studios in the 1950s and 1960s.

A Sorelle Fontana dress worn by Hollywood star Ava Gardner and a Bulgari necklace and emerald-and-diamond ring given by Richard Burton to his lover Elizabeth Taylor, who filmed Cleopatra in Rome, are among about 100 exhibits on show.

In the 1980s, Milan became the capital of Italian fashion and the “Made in Italy” brand became an effective marketing tool worldwide.

Marked by a stunning pair of Dolce & Gabbana black boots encrusted with stones, and Valentino and Armani evening dresses, the final part of the exhibition explores the latest big names in Italian fashion.

It also looks at the uncertain future of an industry plagued by economic difficulties and the advancing age of its designers.

“I was very aware of the debate that is swirling around Milan at the moment. If (renowned fashion writer) Suzy Menkes referred to London as a fashion laboratory, where does that leave Milan?” asked Stanfill.

“I think the fact that the Camera Nazionale della Moda (Italy’s national fashion council) has created a new position, that of CEO, and appointed a British female executive, Jane Reeve, to that position, indicates its own self-awareness that there needs to be a change,” she added.

It is a sentiment expressed by the designers themselves in a film shown at the end of the exhibition.

“Italian fashion needs really to wake up… we need fresh blood,” argues Jacopo Etro, creative director of accessories and leather at Etro. He claims the high number of designers aged over 70 is blocking progress.

It is a message that may be particularly poignant for new Italian Prime Minister Matteo Renzi, 39, who saw the exhibition on Tuesday evening during a visit to London.