‘what a great time we are having, I couldn’t believe this kind of set-up as we never had before’ says one of the visitors. ‘I have been taking part in the Islamic festivals for last 20 years but never joined such a professionally designed event like this before’ says one of the exhibitors. ‘Insha Allah this event is going to be the top event in Australia soon’ says Dr. Priyakon, Director of the Halal Standard Institute of Thailand.

The weekend was the hottest one in Sydney yet it could not resist people to stay home, and people mostly families constantly visiting the event in 2 days. They enjoyed the Expo and the conference in the air-conditioned facility of the grand pavilion of Rosehill Gadens. A large crowd turned out on the 2nd day of the Halal Expo 2017 as the cooler temperature made way from the record- breaking heat in Sydney the day before. 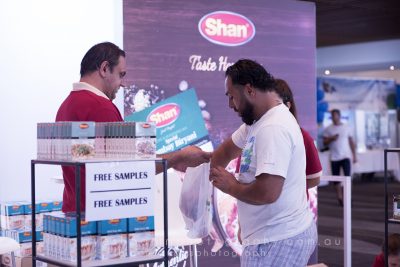 90 local and international showcased their products & services, at their beautifully decorated structured stands, these were amazing reflection of a new image of Australian halal market. People came from all over NSW, including far distances such as Canberra, Newcastle, Wollongong and even interstate with people from Melbourne and Brisbane excited to view the exhibition and take part in the activities.

Members of the public, along with the international guests praised the organisers for the informative exhibits, air-conditioned, spacious and comfortable facilities of the Grand Pavilion Hall at the Rosehill Gardens.

The 2nd day of the IHC 2017 started with the recitation of Holy Quran by Mr. Naseer Nazir. Four sessions, Islamic Investment & Finance, Halal Medicine & Treatment, Islamic Travel & Travel, two workshops on understanding halal standards and how technology has transformed the landscape of the Halal industry, and a special break-out session Role of GSO in halal certification were delivered by 12 top local & international speakers.

The highpoint of the conference was the special breakout session with His Excellency Nabil bin Ameen Molla, the Secretary of General Gulf Standard Organisation, Saudi Arabia who presented a very inspiring speech on the importance of halal market globally. At one stage, he asked the audience, ‘what do you think is halal for only Muslim or everyone one’ and a loudly reply from audience was, ‘for everyone’. His breakout session was followed by a workshop on ‘How technology transformed the landscape of halal industry’ conducted by Mr Ali Sabri Sani Abdullah and Ms Marina Muhammad of Dangang Halal Malaysia. Another workshop was organised by Halal Expo Australia on ‘understanding halal standards and its effect on your businesses’ conducted by Mr Azlan Oppier from Singapore. The sixth session of the IHC 2017 was on ‘Halal Medicine and Treatment’ delivered by famous local lady doctors Dr Seema Mohiuddin and Dr Wafa Samen. The 7th and last session was on the new emerging and growing ‘Halal Tourism and Travel industry’. This session was undertaken by Dr Neol Scott, Professor Griffith Institute of Tourism, Mr Fazal Bahardeen, CEO Crescent Rating, Halal Trip and Muslim Travel Warehouse, Singapore, Mr Imran Musa CEO of Ark Incorporation and Ms Miriam Tulveski, Country Manager (Sydney) for the Visit Indonesia Tourism Office.

A large food court was designed adjacent to the exhibition hall under the shed where 22 different halal ethnic foods were placed by local food caterers and restaurants offering variety of delicious halal food and beverages. Rides and amusements were placed for children however due to heat these could not be operated in the day until late afternoon on Sunday.