The official launch of the poster of the upcoming film ‘Arth 2’ was recently released.

The film, which is a remake of Indian movie ‘Arth’ by Mahesh Bhatt, is directed by Shaan Shahid and produced by Farhad Humayun, and features Shaan Shahid, Humayun Saeed, Humaima Malick and Uzma Hasan. 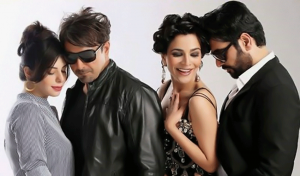 Shahid said at the launch that they want the new Indian government to start thinking about cultural policies as this film will be the first collaboration between India and Pakistan.

He also requested the Indian cultural ministry to officially establish Arth 2 as the first Indo-Pak venture, to allow its release in India and make it a cultural landmark for peace.

Shahid expressed his gratitude for Bhatt for all his support and said that he is a good human and true visionary as his encouragement for the first Indo-Pak collaboration is clearly visible.

The music and promo launch of the film will be held in August, 2014, and the film is expected to release in 2015.