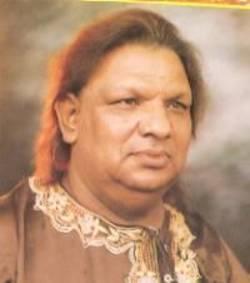 Born as Abdul Aziz in Delhi in 1942, Aziz Mian remains to this day one of the most popular qawwals of South Asia.

He began learning the art of qawwali at the age of 10 under the tutelage of Ustad Abdul Wahid Khan. He moreover received 16 years of training at the Data Ganj Baksh School of Lahore, obtaining a degree in Urdu literature from the University of Punjab.

He was the only prominent qawwal to write his own lyrics; though, like others, he also performed lyrics written by other song-writers. In addition to his own poetry, Aziz Mian performed poetry by Allama Iqbal, and a number of contemporary Urdu poets.

He is also credited with performing the longest commercially released qawwali, hashr ke roz yeh poochhoonga, which runs to slightly over 115 minutes.

He was also a contemporary of the Sabri brothers.

In 1989, the government of Pakistan awarded him with the Pride of Performance medal.

Aziz Mian died on Dec 6 in the year 2000 from complications following hepatitis. He was laid to rest in Multan.