Noel Le Graet claims he turned down an approach from Zinedine Zidane to coach the national team after Euro 2012. 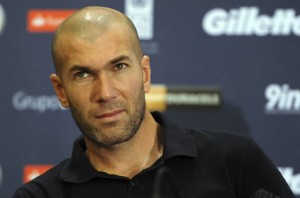 Midfield great Zinedine Zidane offered to coach the national team two years ago but was turned down by the president of the French Football Federation.

Noel Le Graet says in a book due out this week that Zidane expressed an interest in replacing Laurent Blanc following his side’s Euro 2012 quarter-final exit at the hands of eventual winners Spain.

Blanc and Zidane played together when France won the 1998 World Cup and Euro 2000.

In his book, Le Graet writes “Zinedine Zidane would have liked to have coached Les Bleus.”

But Le Graet refused Zidane, now Real Madrid’s assistant coach, because of his lack of experience and opted instead for Didier Deschamps.

“It was not the moment, he needed to coach a team first,” Le Graet said.

The 41-year-old Zidane, who scored twice in the 1998 final when France beat Brazil 3-0 and also in the 2006 final, has been linked to the Monaco job next season as a possible replacement for Claudio Ranieri.