Supporters of rival Houthi and Islah groups have marched in Sanaa, as fears of sectarian violence are rising.

Sanaa, Yemen – After a week of mounting anti-government protests in Sanaa led by the Houthis, a rebel Shia movement from the north of the country, a counter-protest was organized by Islah, Yemen’s biggest Sunni Islamist party and the Houthis’ biggest political rivals. 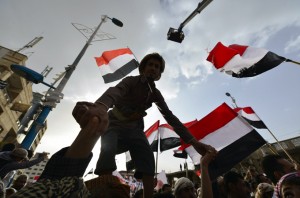 Although the Islah march on August 24 was ostensibly aimed at promoting unity among Yemenis, much of the rhetoric was distinctly anti-Houthi.

“Amran, Amran, Houthis this is your last days,” chanted former members of the 310th Armored Brigade, which was routed by the Houthis in Amran, north of Sana’a, in July, and whose commander Hameed al-Qushaibi was killed in the fighting. Pictures of al-Qushaibi, who disobeyed orders from Yemeni President Abd Rabbu Mansour Hadi to fight the Houthis, were on prominent display.

The march came amidst growing tensions between the Houthis, the government, and Islah, which sees the Houthis as an existential threat after its recent military successes in Amran, historically an Islah stronghold.

Meanwhile, the Houthis’ leader, Abdelmalek al-Houthi, has demanded that the government step down and that Hadi restore fuel subsidies cut in July, threatening a series of “measures” to bring the government down if his demands are not met.

Talks between the government and al-Houthi broke down on August 24, leading to fears of fighting in the capital and rising anti-Houthi and sectarian rhetoric among the group’s rivals.

Although most Houthi supporters gathering in Sanaa for daily anti-government marches have been unarmed, officials say that encampments set up around the outskirts of the city are filled with well-armed Houthi fighters. Hadi has called on Houthi supporters to withdraw from the capital.