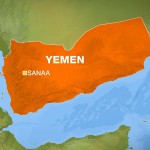 Thirteen people, reportedly responsible for recent abductions of foreigners, arrested in operations in Sanaa and Me’reb.

Yemen’s security forces have arrested thirteen gang members it accuses of being behind a number of kidnappings of foreigners and businessmen, including last month’s abduction of two UN workers.

The arrest involved operations extending from the capital, Sanaa, to Me’reb and other provinces, and will be followed by more measures against other suspects of kidnappings, the country’s ministry of interiorsaid (Arabic) on its website on Monday.

Two Westerners working for the UN, including an Italian, were released unharmed on March 25, shortly after they were kidnapped by gunmen in Sanaa, police sources said, in an incident highlighting the growing security threat in the country.

Kidnappings are common in Yemen, where the government is struggling to contain an insurgency from armed groups linked to al-Qaeda and a southern separatist movement, fighting in the country’s north and sporadic conflicts with armed tribes.

Hostage-taking is sometimes carried out as a tactic by tribesmen to resolve disputes with the government, and by opportunists hoping to sell hostages on to other groups.

Three foreigners – a Czech doctor, a British oil worker and a German – were seized in February.

The US, along with some other Western and Gulf countries, is working with an interim government on political transition after former president Ali Abdullah Saleh was forced from office in 2012 by street protests.