AUSTRALIA and Japan have become partners in a “special relationship” that will see both countries join with the US in a powerful military alliance aimed at curbing China’s influence in the region.

During an extraordinary day in the long Australia-Japan relationship, yesterday in Canberra both Prime Minister Tony Abbott and his Japanese counterpart Shinzo Abe pledged to create a partnership for “peace, prosperity and the rule of law”. 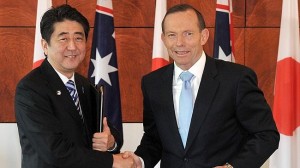 Fresh from reversing almost 70 years of pacifism embedded in his nation’s post-World War 2 constitution, Mr Abe placed Australia alongside the US at the forefront of Japan’s future defence strategy.

He told a special joint sitting of Parliament that Australia and Japan would be “joining hands with the United States, an ally for both our nations”.

“We want to make Japan a country that will work to build an international order that upholds the rule of law … to make the vast seas from the Pacific Ocean to the Indian, and those skies, open and free,” Mr Abe said.

He said a new defence technology agreement would be the first part of “engraving the special relationship in our future”.

Strategic analyst and head of the Defence and Strategic Studies Centre at the Australian National University Hugh White said Mr Abe’s speech made Australia one of the central planks of Japan’s security plan for the Asia-Pacific region.

“The big question for Australia is whether or not it is our interest to be so close to Japan as its relationship with China grows more bitter,” Professor White said.

“Is it appropriate for Japan to use Australia and the US to bolster Japan’s security against China?

“Japan is trying to build a regional coalition against China but that might not be the best way to deal with China.”

Mr Abbott said Australia welcomed Japan’s push to be a more capable strategic partner in the region and he assured Beijing that the new arrangement was not aimed at any one country.

“I stress, ours is not a partnership against anyone; it’s a partnership for peace, for prosperity and for the rule of law,” he said.

“The lesson of the last century is that the countries of our region will all advance together or none of us will advance at all.”

Labor Senator Sam Dastyari warned that the government was risking links with China by cosying up to Japan.

“It’s very important that we, as a nation, not be seen to be taking sides in disputes involving China and increasingly this government is giving the impression that they’re taking sides,” Senator Dastyari told Sky News.

Defence Minister David Johnston took a veiled swipe at China when he said Australia sought positive and proactive defence relations with Japan and the United States based on “common democratic values”.

“Australia is seeking to conduct more advanced trilateral exercises with a focus on improving each country’s ability to enhance maritime security through air, land and maritime cooperation,” Senator Johnston said.