Outbreak may be worse than thought as aid workers blocked from some areas and families hide the infected.

Families hiding infected loved ones and the existence of “shadow zones” where medics cannot go mean the West African Ebola epidemic is even bigger than thought, the World Health Organization has said.

Some 1,427 people have died among 2,615 known cases of the deadly virus in West Africa since the outbreak was first identified in March, according to new figures released by the WHO on Friday.

Under-reporting of cases is a problem especially in Liberia and Sierra Leone, currently the two countries hardest hit. 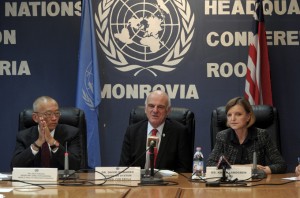 “As Ebola has no cure, some believe infected loved ones will be more comfortable dying at home,” the WHO said in a statement detailing why the outbreak had been underestimated.

“Others deny that a patient has Ebola and believe that care in an isolation ward – viewed as an incubator of the disease – will lead to infection and certain death.”

Corpses are often buried without official notification. And there are “shadow zones”, rural areas where there are rumors of cases and deaths that cannot be investigated because of community resistance or lack of staff and transport.

The WHO said it is now working with Medicines Sans Frontieres (MSF) and the US Centers for Disease Control and Prevention to produce “more realistic estimates”.

On Friday, the WHO said it had drawn up a draft strategy plan to combat the disease in West Africa, and details would be released early next week.

David Nabarro, Senior United Nations System Coordinator for Ebola, who was travelling with the WHO’s Fukuda in Liberia, said the strategy would involve ramping up the number of health workers fighting the disease.

Despite initial assertions by regional health officials that the virus had been contained in its early stages, Ebola case numbers and deaths have ballooned in recent months as the outbreak has spread from its initial epicenter in Guinea.

“We think six to nine months is a reasonable estimate,” Keiji Fukuda, the WHO’s Assistant Director-General for Health Security, said during a visit to Liberia, speaking of the time the agency now believes will be required to halt the epidemic.

An Ebola outbreak will be declared over in a country if two incubation periods, or 42 days in total, have passed without any confirmed case, a WHO spokesperson said.