Thousands of Houthi supporters have called for the fall of Yemen’s government. But what do the Houthis really want?

Sanaa, Yemen – Thousands of supporters of Yemen’s Houthi movement protested in the streets of the Yemeni capital in response to a call by the group’s leader to force the government to step down.

In a televised speech on August 17, Houthi leader Abdulmalek al-Houthi demanded that fuel subsidies, which had been cut significantly in late July, be reinstated, among other demands. He gave the government until Friday to meet the Houthis’ demands, or said “other steps” would be taken 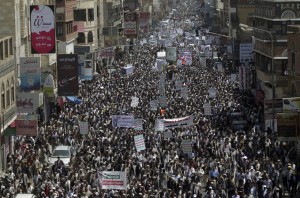 “This government is a puppet in the hands of influential forces, which are indifferent to the rightful and sincere demands of these people,” al-Houthi said in his speech, referring to the United States.

The Houthis are also demanding a more representative form of government that would reflect the seats allocated to political groups and independent activists during Yemen’s 10-month National Dialogue Conference, a series of meetings to map out the political future of Yemen after its 2011 uprising.

“Our demands are like the demands of the Yemeni people who seek a decent life, a good economy, security, stability, freedom of expression,” Mohammed Abdul Sallam, a spokesperson for the group, told media, without getting into specifics.

Meanwhile, Yemeni President Abd Rabbo Mansour Hadi has called for dialogue with the Houthis, and invited the group to join a “unity government”, according to AFP news agency.

The Houthis, Hadi said on Wednesday, must “be committed to what all Yemenis agreed upon, and work to achieve their goals in the political framework that were guaranteed by the constitution, as well as the outcome of national dialogue”.

Officially known as Ansarallah [the partisans of God], the Houthi rebel group began as a theological movement that preached tolerance and peace in the early 1990s, according to Ahmed Addaghashi, a professor at Sanaa University and author of two books on the movement, Houthi Phenomenon and Houthis and their Political and Military Future.

Addaghashi told media that the Houthi movement originally held a considerably broad-minded educational and cultural vision. A religious group affiliated with the Zaydi sect of Shia Islam, the Houthis maintain a stronghold in the northern province of Saada today.

“The group started as a gathering called the ‘Believing Youth Forum’ in the early nineties. Then, it fell into internal strife between two lines; the first called for more openness, while the second urged sticking to the traditional legacy of the Shia sect,” Addaghashi said.

Ironically, said Addaghashi, Hussein Bader Addian al-Houthi, the founder of the group, was in favour of the first line. “The movement turned to arms in 2004 on grounds of self-defence when the first war with the government erupted.”

Addaghashi said that tensions between Yemeni security forces and the Houthis first flared when the group’s supporters protested in mosques in the capital, which then-President Ali Abdullah Saleh saw as a challenge to his rule. Saleh ordered the arrest of some group members, and urged their then-leader Hussein Bader Addian al-Houthi to stop the protesters from disturbing worshippers.

“The first war began when Saleh sent some troops to the province of Saada to arrest Hussein who refused to curb his supporters,” Addaghashi said. Hussein al-Houthi was killed in 2004 after Saleh sent government forces into Saada. The years-long intermittent war ended in a ceasefire agreement in 2010.

In 2011, the Houthis were among many forces that took part in the revolt against Saleh.

The group has been strongly opposed to one of the central recommendations of the National Dialogue Conference: the transformation of Yemen into a federal state of six regions. Under the proposed refiguration, Saada province, which has historically been the Houthis’ stronghold, would be linked to the Sanaa region.

The Houthis have demanded a greater share of power in the federal government, and that the north be designated its own region. In documents released by whistle-blowing website WikiLeaks, US defence analysts have suggested the Houthis are unlikely to demand independence, and would continue on their stated aim of regional autonomy.

“The Houthis are capitalising on widespread frustration with the government and the recent rise in fuel prices to rally support and extract political concessions,” April Longley Alley, a Yemen specialist with the International Crisis Group, told AFP news agency.

“What is happening now appears to be increasingly dangerous political bargaining as part of the Houthis’ bid to become a dominant political force in the north and in the national government,” she said.

The Houthis have recorded a series of important victories over government and rival tribal groups in recent months. In July, supported by the country’s largest tribal federation, Bakil, the Houthis captured Amran from the Hashid tribal federation, and inflicted a humiliating defeat on the powerful al-Ahmar clan, co-founders of the rival Sunni Islamist Islah party.

“What happened there [in Amran] will not harm the republic. The problem was a desire for trouble and criminal attacks by known parties,” said Abdulmalek al-Houthi, in a televised speech broadcast by his group’s television outlet, Al-Masira, referring to the Islah party.

The Houthis’ political rivals, the Islah party has accused the Shia rebels of being a proxy of Iran and trying to restore the Zaydi imamate that ruled Yemen until 1962. Islah has repeatedly accused the movement of creating unrest in Amran and other regions as part of a plan to seize control of the capital Sanaa.

The Houthis have historically been concerned with reviving Zaydism amid the increasing influence of Salafism. Since Yemen’s 2011 uprising, the Houthis appear to have participated in more sectarian conflicts.

A year after the start of the revolt, which led to the overthrow of Saleh, the Houthis besieged a religious school controlled by Salafis in Saada. The Shia Muslim rebels said the institute was being used to recruit foreign fighters, but the Salafis said the incident was an attempt by the Houthis to strengthen their hold on the province.

Hundreds died in the clashes, which ended when the Salafis agreed to leave the province.

Later clashes, in cities closer to the capital, pitted the Houthis against the Sunni Islamist Islah party and army brigades allied to it.

“The Islah party… fears Ansarallah [Houthis] will take revenge for [Islah’s] participation in the former regime’s [of Ali Abdullah Saleh] wars in Saada,” Usama Sari, a pro-Houthi journalist, told Al Jazeera. According to Sari, the Houthis have accused Islah of inciting people against them, and allegedly encouraging some army regiments to fight them.

Meanwhile, Hadi’s government and other opponents have frequently accused Iran of arming the Houthis. The government said that it has seized arms cargoes originating from Iran that were heading to the rebels in the north, but the Houthis dispute accusations of foreign help.

Unlike his predecessor, Hadi, who took power in 2012 following Saleh’s removal, has taken a less confrontational stance towards the Houthis, prompting the ire of Islamist parties, who accuse him of closing his eyes to alleged Houthi crimes.

Hadi has not addressed the criticism directly but his minister of defence, Mohammed Nasser Ahmed, said that the country’s armed forces were “neutral and stand at an equal distance from everyone”.

Sami Ghaleb, a political analyst and founder of Al-Nida newspaper, said that the Yemeni president has common interests with the Houthis, and shares the same tribal and political opponents. “Hadi wanted to weaken the forces that derail his movement. The strongest one is the Islah party and its tribal and military allies,” including former President Ali Abdullah Saleh, Ghaleb said.Meanwhile, the Houthis have not been defeated militarily, and analysts have attributed rising levels of support from residents in northern Yemen to these victories.

“The people found a growing party that was not involved in the corruption of the former regime and its war in the south,” said Ghaleb, adding that the interim government’s failure to address people’s grievances has boosted support for the Houthis.

The group has also moved into mainstream politics in Yemen, after it held 35 seats in the National Dialogue Conference. The political talks brought together 565 delegates from across Yemen’s political spectrum, including tribal and religious groups, and independent women’s and human rights activists.

“The Houthis have doubled their ability to influence the decision-making process,” he said. “Previously, the Houthis were not an important part of the transitional process, but now no one can bypass them.”