The February 20 movement helped spawn mass demonstrations that demanded democratisation in 2011. What happened?

“Freedom for all political prisoners in the Maghreb” is the new calling card of Moroccan activists, many of whom are linked to the February 20 movement, born during the mass demonstrations that swept across Morocco in 2011. 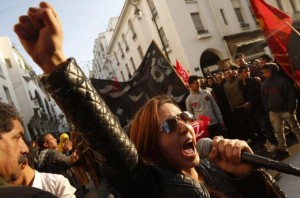 Holding banners and speaking in a variety of languages that mix local Moroccan Arabic with a global idiom, activists have encapsulated their current demands in the epithet: “Free Koulchi” [ar], translated as “Free Everyone”.

Inspired by the Arab uprisings taking place in Tunisia and in many neighboring Arab countries, the February 20 movement originally regrouped young, middle-class Moroccans who wanted to change their country.

But as political pressure has caused the group’s numbers to drop dramatically, and activists become increasingly disillusioned with a lack of meaningful change in Morocco, the movement is much weaker than it was in 2011.

“An opposition divided in its aims and methods has been further fragmented by reforms that, while limited and largely cosmetic, have taken the edge off public frustration,” said Sharif Nashashibi, a United Kingdom-based journalist and Middle East analyst.

“Moroccans are also fearful of experiencing the turmoil that has engulfed Arab Spring states if they rock the boat too hard or too fast,” Nashashibi added.

February 20 movement activist Qods Leftansa, 23, said that the movement is still alive, however.

“There are several groups across Morocco who appear once a month to show that the movement lives on because our members are still in prison. The situation hasn’t changed enough for us to be silent,” Leftansa, who has participated on the group’s logistics committee, said.

Hakim Sikouk, one of the group’s online coordinators, agreed. “[The movement] is just as necessary now because its demands have not been met. The political and economic situation remains the same,” he said.

Last week in Rabat, the group participated in a sit-in, alongside 11 other organizations, including the youth branches of the Moroccan Association of Human Rights, the Vanguard Democratic and Socialist Party, and the Unified Socialist Party, to protest against youth unemployment and poverty. Working together, Leftansa said, “can only reinforce Morocco’s youth movement”.

In March 2011, the King announced changes to the constitution that included giving the prime minister the power to appoint ministers himself. The February 20 activists proclaimed that a new constitution was still not enough to establish real change. Still, the approved constitutional amendments led to early legislative elections on November 25, 2011 and the conservative Islamist Justice and Development Party prevailed. After the elections, protesters once again took to the streets chanting “more democracy” and “less power to the King”.

Competing agendas since that time have sown divisions within the movement. “Some protesters want a parliamentary monarchy and some want the king to be removed completely,” said Hamza Mahfoud, one of the group’s current leaders. “This is why the group is getting weaker and weaker.”

Social democrats in the movement have campaigned for a constitutional monarchy. A second group, made up of more hardline leftists and members of the Justice and Spirituality movement, a religious group that calls for the king to step down, continued to push for a popular constitution.

But even among this second group, further ideological splits occurred. “When the [Justice and Spirituality] movement started to make women walk separately from men, I felt horrified and it was as if we were going back to the dark ages,” said Hilana Rizki.

Rizki eventually left the group in 2012, blaming ideological differences between her counterparts, and police harassment. “It’s difficult to protest here,” she said.

Ahmed Madiany, 28, a journalist at Morocco’s al-Akhbar al-Youm newspaper, no longer participates with February 20 campaigns, but has not left the group. “This is not a movement with laws and rules. It’s not a question of being a member or not. There were people who dreamed of radical change but many people chose other paths. As a journalist, I see myself as a press activist, giving a voice to those excluded from the official narrative.”

At the festival of Gnawan music in the seaside town of Essouira in June, satirist Mohammed Tsouli asked members of the public if they knew about Morocco’s political prisoners [ar]. “Yes”, many replied, “Ayoub Bouad and Alhaqed”.

According to the Association for the Defense of Human Rights in Morocco, there has been an increase in the number of political prisoners [fr] between March and July 2014, from 288 to 338 prisoners.

On April 6, 11 members of the movement, including Bouad, were arrested for unlawful assembly after participating in a government-sanctioned march organized by three of the country’s leading trade unions. One month later, February 20 member and rapper Alhaqed was arrested for the third time soon after the release of his song “Walo” [“Nothing”], which criticized the regime.

Bouad, nicknamed Simpson, has since been released following an activist campaign under the banner of “Free Simpson” [fr].

Moroccan Prime Minister Abdelilah Benkirane has stated [fr] that no one has been imprisoned because of their participation in the February 20 movement. “The February 20 movement has stopped on its own,” Benkirane told France’s TV5Monde last February. “We are not perfect. We are in the process of evolving. I think that the dialogue we’re having today was unthinkable five years ago. Today… February 20 [activists] go into the streets. No one is stopping anyone from going out [to protest].”

But human rights activist Zineb Belmakhdem told Media that the shrinking number of protesters in Morocco is a sign that the state’s “repressive machine is deeply rooted and more aggressive than what was left of the movement”.

“Those kinds of ideas never die, and that kind of hope never subsides. The number of protesters shrinking does not mean peoples’ needs or desires for social justice should weaken,” Belmakhdem said.

Last week, activist Wafae Charaf, 26, received a one-year prison sentence for falsely reporting an offense. After alleging that she was beaten for attending a workers’ protest in Tangier in April, Cheraa was arrested in July before an investigation into her complaint was concluded.

This followed the three-year sentence handed down in July to February 20 member Oussama Housne, 22, for filing a false torture report. Housne detailed his alleged kidnapping [fr] and torture in Casablanca in May before his arrest.

“What has happened is that the original coalition of the movement has been picked apart, leaving a core of leftist activists weakened by the withdrawal of [the] Justice and Spirituality [movement],” said Michael Willis, professor of North African politics at Oxford University. “The state has tried to marginalise them by a mixture of co-optation, trying to bring them into the political system, and intimidation. They have harassed working class members in particular.”

Driss Maghraoui, a professor of history at al-Akawayn University, agreed. “There are clear-cut strategies of state intimidation,” he said, which have continued against February 20 activists. Nonetheless, the Moroccan state has not ignored the group’s demands: On July 29, to mark the 15th anniversary of his accession to the throne, King Mohamed VI pardoned [ar] 13,218 prisoners.

This move came the day before a television speech by King Mohammed VI at the end of Ramadan in which he said [ar]: “I ask in amazement along with Moroccans: where is the wealth [of the country]?” The speech led many Moroccan social media users to sarcastically ask [ar] if the King had become a member of the February 20 movement.

“Undoubtedly the protests have had an impact on citizens,” said activist Sikouk, adding that the movement “pierced a hole in the wall of fear” in Morocco and led people to organism for social rights such as employment and health-care. “The group’s impact continues to be felt and in the future will depend on the perseverance of its members and of Moroccan protest movements in general.”