Let’s explore a very simple question. Exactly how does the TNA propose to give dignity to the Tamils by living away 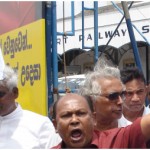 from them? Do they propose to run ‘Eelam’ by remote control from Colombo? How many trips have the chief ministerial candidate made to Sri Lanka’s North or even East during LTTE reign or even after its demise apart from the recent visits to campaign? Do the TNA even know areas of the North now given a new life and look courtesy of the Sri Lankan military personnel who are rebuilding all that the LTTE destroyed? If Tamils cannot show appreciation for all the change that they now enjoy, the freedom that they were denied during LTTE rule then the Tamils have a very long way to travel towards reconciliation.

Exactly what dignity do these TNA MPs give the Tamils whilst living in Colombo?

§  Leader of the TNA Sambanthan – Colombo 5

A question never answered is how many Tamils exactly supported LTTE inspite of its murderous ways?  With LTTE armed cadres now eliminated the LTTE stranglehold on Tamils still remains at large amongst LTTE front organizations, LTTE Tamil Diaspora, the LTTE-backed TNA and now a parachuted new entrant claiming stewardship of the Tamils as the chief ministerial candidate.

If many Tamils are thankful to the LTTE for facilitating the opportunity for them to now live overseas with exactly half of the Tamil population now referred to as ‘expats’ it means a very large number of Tamils in Sri Lanka are recipient of foreign funds sent through them. But exactly what number of Tamils are the shunned people and were these not the numbers from which the LTTE pick and chose its cadres – leaving aside the areas of Jaffna main which were under military rule since 1996. So we have a very small number of Tamils who have nothing positive to say about the LTTE and that has made us understand why there is no major breakthrough in reconciliation unless all Tamils stop wanting to divide the nation.

Do they really want their own people to again be led by another maniac? Has the nation not seen enough bloodshed? Have Tamils asked if any of the TNA children fought for the liberation of the Tamil people by joining the LTTE? Where do the children of the TNA reside? Are they not living overseas and preaching lies to fool Tamils? For what reasons have Tamils allowed the Tamil Nadu politicians to dictate an ‘Eelam’ in Sri Lanka, do Sri Lankan Tamils wish to have Tamil Nadu Tamils to come over and take over their lands and lives? Do Sri Lankan Tamils want to replace their current leaders with Tamil Nadu leaders? Exactly what type of future scenario do the Tamil people propose to create by allowing remnants of the LTTE to continue calls for separatism? Is it not in the hands of the Tamils to now decide how they want to carve their future? Would they realistically want to promote the TNA for opportunism when the likelihood of Sri Lanka turning into an East Timor is something the rest of the country cannot ignore. The emphasis is again on the external forces and external players involved throughout LTTE reign – we had the Norwegians, scores of Christian/Catholic NGOs and now a Father holds the umbrella of all the LTTE front organizations overseas – what do we conclude from such a system in place at different levels throughout the war and even post-war?

Would it not be a good time for the Hindus and Buddhists to think of the cultural, social, religious and even emotional bonds they have running to centuries and attempt to rebuild those bonds instead of allowing external factors to abuse, misuse and manipulate them taking the entire nation to peril?

The Tamils now need to stop being spectators and help rebuild the nation instead of allowing groups to use them to divide the country.