In the opening weeks of August, Saudi Arabia carried out more than one execution per day, human rights groups say.

Human rights groups say there has been an upsurge of executions in Saudi Arabia, after more than one execution per day in the first three weeks of August was carried out. To date this month, the country has almost doubled the number of declared executions in the seven months before August 4. 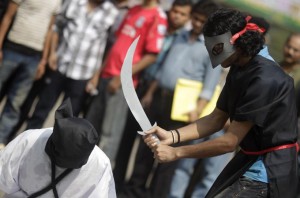 Charges have included murder, drug smuggling, and sorcery. On August 18, four members from the same family in the southeastern city of Najran were beheaded for smuggling a “large quantity of hashish“.  The next day a Saudi national was executed in the northern city of Qurayyat for sorcery.

The Saudi Ministry of Justice has announced the execution of 26 individuals since August 4. In the seven months prior, 15 executions were carried out, bringing the total number to 41 so far this year. However, there were no executions during the Islamic holy month of Ramadan this year between June 28 and July 28.

“One theory behind the increase is that there is a backlog of cases [since the start of the year],” said Adam Coogle, a representative of New York-based Human Rights Watch.

According Sevag Kechichian, a researcher with London-based Amnesty International, the rate of executions in the first half of last year was high, before slowing down, while this year the reverse is true. One way of explaining this, Kechichian said, is that Saudi authorities may be trying to reach an annual target: at 79, the number of announced executions in 2012 and 2013 was identical.

“A major cause of executions is the aftermath of the 2011 uprisings across the Middle East,” he told media, adding that this, coupled with Shia mobilisation in Saudi Arabia and intra-regime fighting, might mean the authorities want to send a message. “It’s about keeping the regime stable.”

In May, a Saudi court sentenced to death prominent Shia cleric Nimr al-Nimr, who was arrested in July 2012. The court convicted him of inciting violence in his speeches and supporting the unrest in the eastern province of Qatif, home to many of the kingdom’s minority sect who say they face discrimination. Al-Nimr’s defence counsel has appealed the sentence, and a final ruling is expected on September 16, according to al-Nimr’s brother via Twitter.

Shia Muslims number roughly two million in Saudi Arabia, or 15 percent of the population. Protests in Qatif have been ongoing since 2011.

However, Professor Gregory Gause, head of International Affairs at Texas A&M University, does not see a direct political explanation for the recent spate of executions. “It’s not like people are being arrested for protesting in the Eastern Province and then sentenced to death,” he said. The executions “certainly fit in with a more general crackdown on the small margin of political freedom that the king allowed before 2011, but these executions are not for political crimes”.

The legal system of Saudi Arabia is based on Sharia, Islamic law. Unlike other countries that use Sharia for legal guidance, Saudi Arabia does not possess a codified legal system, though attempts in this direction began in 2010. Since the country does not have a formal penal code, it leaves judges free to hand out sentences based on their interpretations of Islamic law.

Discussing the status of Sharia in the country, an editorial published by Saudi newspaper Al-Iqtisadiah last week said that “it has become urgent for a quick, efficacious and studied application of [personal law] rulings”.

Khaled Abou El Fadl, a professor of Islamic law at UCLA, told media that Saudi law is based on two separate systems. In business matters, it is sophisticated. In civil law, however, Islamic courts retain jurisdiction. “What this has amounted to is Sharia courts staffed by judges who are completely disconnected from modern criminal law,” he said. “The amount of discretion left to judges is monumental”, so that “there is no way to guarantee a fair trial”.

According to Abou El Fadl, judges in civil courts have also become more vicious in their application of Islamic law, as they vent their frustrations against what they perceive to be the un-Islamic behaviour of foreigners or members of the royal family.

Private media could not reach the Saudi Justice Ministry and repeated attempts for comment from the Saudi Interior Ministry went unanswered. In 2007, the Justice Ministry stated in a document the publication of judicial decisions in the kingdom is based on the use of fiqh (Islamic jurisprudence) and Islamic law.

It also explained that judicial outcomes are based on the correct application of Islamic law with a view of interpreting current events.

Meanwhile, the rate of executions has slowed down in the last week, with recent beheadings carried out only in the case of murder charges.

The planned beheading of Hajras al-Qurey scheduled for August 25, which prompted complaints from rights groups, has since been delayed.

The 53-year-old and his son, Muhammad, were arrested in 2012 and charged in 2013 with drug smuggling and attacking a policeman. Both claimed to have been tortured and forced to give false confessions during interrogation. An appellate court and the country’s supreme court upheld the verdict.

But members of the al-Hajras family told media by email that they hope the king will intervene to grant a pardon. “These are not celestial rulings, but human interpretations open to error. The king has often granted pardons in similar cases, but unfortunately these are frequently given to those with a relationship to powerful people.”

“There is a classist and ethnic bias in the way the Sharia courts handle cases,” said legal scholar Abou El Fadl. “Depending on whether you’re Bangladeshi, Indian, Syrian and so on, different gradations tend to be at different levels of risk.”

Each year, the Saudi government executes foreign nationals as well as local citizens.

However, Fahad al-Anzi, a member of the king’s consultative council, has accused foreign organizations of basing their views on distorted facts. In response to calls by Amnesty International to stop the execution of Hajras al-Qurey, al-Anzi said the human rights group “has not understood the system of criminal procedures that define many of the accused’s [legal] guarantees”.

Al-Anzi added the decision to execute drug smugglers is subject to judgments that transcend international agreements and human rights as they are understood in the West. Instead, it is based on legal rulings of religious scholars and religious law.

For Abou El Fadl, however, this is not a question of East versus West:

“I think it’s the consensus of Muslim, educated experts that [in Saudi Arabia] there is abuse of a legal system that’s being applied out of its historical context … There is discretion and anarchy. It’s politicized, racialist, and classist,” he said.