Palestinians in the Gaza Strip express anger and despair as the death toll from Israel’s military campaign rises. 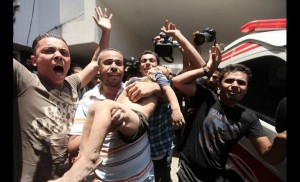 Gaza City – As Israel continues to bombard the Gaza Strip with air strikes, many in the besieged Palestinian territory have voiced concerns about the devastating impact of a prolonged Israeli military campaign.

“We need a truce and a lift of the unjust siege on us,” said 33-year-old Riad Ahmad, as he sold qatayef, a sweet pancake popular during Ramadan, in Gaza City. “The siege is the reason behind all the rockets that were fired [at Israel]. The siege strangles us; we are suffocating.”

Qedra told reporters that two women and three children were killed in two separate airstrikes on the central Gaza Strip refugee camps of al-Bureij and al-Mughazi on Wednesday.

According to Ibrahim Abrach, a political science professor at Al-Azhar University in Gaza, Israel launched the recent attacks because of a recently-signed deal between rival Palestinian factions Hamas and Fatah to form a Palestinian consensus government.

“Israel doesn’t want to end Hamas’ rule in Gaza and Hamas knows that it can’t make victory over Israel, so both parties have political goals and the reconciliation might be the price,” Abrach said. “Hamas is restoring dignity for itself as a resistance movement and an active, main player in Gaza.”

“Israel is not eager for war, but the security of our citizens is our primary consideration,” Israeli Prime Minister Benjamin Netanyahu said in a statement on Tuesday. He added: “We are determined to give our citizens the safety and security they deserve.”

But Palestinian academic and political analyst Adnan Abu Amer told Al Jazeera that if Hamas’ demands on the Israeli government – lifting the siege of Gaza, the release of re-arrested Palestinian prisoners, and non-interference by Israel on internal Palestinian politics – aren’t met, the situation could deteriorate even further.

“If these demands were not met, the battle would last for more and it may include heavy human prices (casualties) and losses between the two sides. But at this moment, it’s early to talk about prices,” Abu Amer said.

“The question is: will the Israelis be ready to stay in bomb shelters for three weeks in the summer?”

Meanwhile, Mohammed Haboush, a Palestinian Authority employee in Gaza City, told News Agencies that only a mediated settlement could put an end to the conflict.

“[These] kind of battles end with no winner or loser,” he said, adding that Israel should realise that “the more it assaults us, the more we unite”.