Water supplies have dropped in key areas due to a sharp increase in production at the rebel-controlled Euphrates Dam.

Gaziantep, Turkey – When severe water cuts began to hit Aleppo province in early May, residents started referring to a “water war” being waged at the expense of civilians. Images of beleaguered women and children drinking from open channels and carrying jerry cans of untreated groundwater only confirmed that the suffering across northern Syria had taken a turn for the worse. 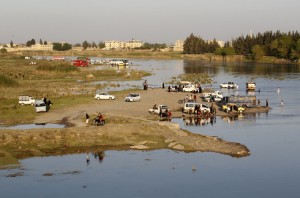 However, lost in the daily reports was a far more pernicious crisis coming to a head: a record six-metre drop in Lake Assad, the reservoir of Syria’s largest hydroelectric dam and the main source of water for drinking and irrigation to about five million people.

Under the watch of the  Islamic State group – formerly known as the Islamic State of Iraq and the Levant (ISIL) – levels in Lake Assad have dropped so low that pumps used to funnel water east and west are either entirely out of commission or functioning at significantly reduced levels. The shortages compel residents in Aleppo and Al Raqqa to draw water from unreliable sources, which can pose serious health risks.

The primary reason behind the drop appears to be a dramatic spike in electricity generation at the Euphrates Dam in al-Tabqa, which has been forced to work at alarmingly high rates.

“[Lake Assad] is pumping out more than it is receiving. This is because the electricity generators are working 24 hours a day, more than they should be,” Waleed Zayat, a mechanical engineer working for the Syrian opposition’s interim government’s Ministry of Water Resources and Agriculture in Aleppo.

“Ten years ago the government told engineers to forget this dam for energy [generation] … that it is only a strategic reserve of water,” Waleed said. “Normally we should not use more than one or two of the turbines for more than four or five hours per day. But for the last month and a half they have been using eight at full [capacity].”

The Islamic State group is not alone in over-exerting the Euphrates Dam. With the destruction of many other power-generating facilities, the Syrian government, which continues to pay salaries of employees at the facility, also places demand on the dam and sends orders from the national grid’s headquarters in Damascus.

“The Islamic State group has no technical capacity to operate the dam, but it has military control and therefore controls the energy produced and where it is sent,” a member of the Syrian opposition coalition with working knowledge of the dam, but who declined to be named due to political sensitivities, told Al Jazeera.

“At the same time, the regime requires that the administration send electricity to regime-controlled areas, like Hama, as well. The switches are turned on and off in particular areas on a daily basis,” he said.

At the beginning of May, electricity supply in rebel-controlled al-Raqqa suddenly spiked, reaching up to 16 hours per day – unheard of in Syria’s conflict-ridden northern provinces.

“When the Free Syria Army (FSA) captured al-Tabqa [in February 2013], they did their best to provide electricity. But for months we were getting about one hour of electricity per day. We had one month with no electricity at all,” Ahmed, a resident of Tel Abyad in al-Raqqa province, who would not give his full name, told Al Jazeera over Skype. “But when the Islamic State group took control, electricity came for eight hours.”

“They know electricity and water will make them close to people,” Ahmed said.

The reasons behind the uptick are likely tied to bargaining over other key infrastructure in Syria’s north, including the al-Haririye thermoelectric station in eastern Aleppo, which is Syria’s largest energy-producing facility. Today, al-Haririye remains a contested spot that is militarily controlled by the Islamic State group, but surrounded by regime forces. The station, working at reduced capacity, relies on refined fuel that only the Syrian government can provide.

As the consequences of heightened production at the dam came to a head at the end of May, the Islamic State group began a campaign of blaming Turkey for the drastic fall in water levels. On a number of online forums belonging the group, the Islamic State group claimed that Turkey had intentionally cut off the flow of the Euphrates River into Syria as a tool of war.

In the month of April, Turkey released more than the minimum 500 m3/second of water to which it is committed under a 1989 agreement. In May, the Euphrates’ flow into Syria dropped to 222 m3/second, but the bulk of the cut-off occurred over three consecutive days at the end of month.

This drop alone is not enough to have led to such a drastic water decrease, and it is also not unusual for such cuts to appear periodically when Turkey undertakes repairs on its own upstream dams. By early June, water flow from Turkey into Syria was steadily climbing.

A mechanical engineer from al-Tabqa, who didn’t give Al Jazeera his real name but used the pseudonym Hassan, who has working knowledge of the conditions at the dam, asserts that up until July 2013, when the Islamic State group took control of the dam, levels in Lake Assad were stable.

Technical experts familiar with the situation in al-Raqqa also point out that a lack of oversight has facilitated illegal withdrawing of lake water for irrigation purposes. The region is also currently facing the worst drought in 60 years, with rainfall averages in northeast Syria down by 50-85 percent since October, further explaining the decrease in the Euphrates’ flow.

“In spite of these alarming indications, both Syria’s regime and opposition groups are in a state of denial: neither is responding to, or preparing for, a food and water crisis,” wrote Nouar Shammout, a researcher at Chatham House. “If the lake loses one more metre, the water system will stop working.”

On June 2, as conditions continued to worsen, the General Administration for the Euphrates Dam issued a statement that it would begin rationing electricity in al-Raqqa in order to avert further losses and regain levels in the lake.

However, these measures have come too late for Aleppo’s residents, most of whom are not living under the Islamic State group’s control, but rather in territories controlled by the regime or FSA.

“At the moment only one of the two water pumping stations next to Lake Assad – al-Khafse – is working. The other station’s pumps aren’t reaching the water in the lake.

Making matters worse is the continued targeting of water networks by both regime and opposition forces, which have attacked strategic lifelines, such as water channels, to put pressure on their opponents. “The deliberate targeting of water supply networks and related structures is now a daily occurrence in the conflict,” Shammout wrote.

On May 9, the Syrian government allegedly ordered its employees at al-Khafse station, also in territory controlled by the Islamic State group, to cut off the flow of water heading west towards Aleppo. Previously, on May 1, the regime attacked al-Sakhour plant, which provides electricity to the opposition-held Suleiman al-Halabi station, the main water pumping station in Aleppo city.

Also in early May, the al-Qaeda-affiliate Jabhat al-Nusra is reported to have inadvertently cut off water to the entire Aleppo city for nine days while trying to divert water away from regime-held areas.