Vice president Joe Biden says US will “bring armed group to justice” after beheading of two American reporters in Iraq.

Joseph  Biden, the US vice president, has said his country will follow the IS group “to the gates of hell” following the beheading of two American journalists by the group in Iraq.

Biden vowed to hunt down and defeat the IS group, while stepping up efforts to recruit an international coalition to join in the fight. 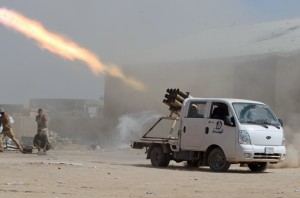 “The American people are so much stronger, so much more resolved than any enemy can fully understand,” Biden said in a speech on Wednesday.

“When people harm Americans, we don’t retreat, we don’t forget.”

“We take care of those who are grieving and when that’s finished, they should know we will follow them to the gates of hell until they are brought to justice,” the US vice president said. “Because hell is where they’ll reside.”

The speech came as US Defense Secretary Chuck Hagel has said dozens of US citizens are joining the Islamic State group.

“We are aware of over a hundred US citizens, who have US passports, who are fighting in the Middle East with ISIL [IS] force,” Hagel said in a television interview. “There maybe more, we don’t know, we can’t take a chance.”

Earlier on Wednesday, US President Barack Obama called for an international front against the IS, as US allies Britain and France weighed possible military action.

“We know that if we are joined by the international community, we can continue to shrink ISIL’s sphere of influence, its effectiveness, its financing, its military capabilities,” said Obama.

Britain, with one of its nationals also under threat of beheading, said it would not rule out taking part in air strikes if necessary.

“I can assure you that we will look at every possible option to protect this person,” UK Foreign Secretary Philip Hammond said.

French President Francois Hollande likewise raised the possibility of a military response to the threat posed by the IS.

“The head of state underlined the importance of a political, humanitarian and if necessary military response in accordance with international law” to fight against IS, the French presidency said.

Obama will lead a UN Security Council session on the threat of foreign fighters in Iraq and Syria on September 25, a US official said on Wednesday.

US Secretary of State John Kerry revealed he was working to forge a global coalition to fight the “medieval savagery” of the Sunni armed group which has taken over large swaths of Syria and Iraq.

Meanwhile in the US, Sotloff’s family paid tribute for the first time since his death to the 31-year-old reporter, remembering a gentle soul with a fondness for junk food and golf who was fiercely committed to giving “a voice to those who had none”.

Barak Barfi, a friend of Sotloff who is serving as family spokesman, said Sotloff was “torn between two worlds,” the statement said, but “the Arab world pulled him.”

“He was no war junkie … He merely wanted to give voice to those who had none,” Barfi said outside the family’s home in a Miami, Florida.

Barfi ended the statement with off-the-cuff remarks in Arabic, saying: “Steve died a martyr for the sake of God.”

He then challenged IS leader Abu Bakr al-Baghdadi to debate Islam, saying, “Woe to you. You said the month of Ramadan is the month of mercy. Where is your mercy?”

“God does not love the aggressor,” added Barfi, who is an Arabic scholar and research fellow at the New America Foundation think tank in Washington.