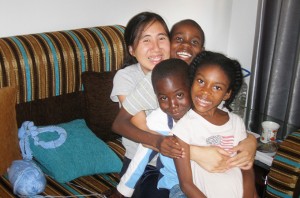 Doha, Qatar – An American couple accused of starving their adopted daughter to death has been found guilty and sentenced to three years in prison.

The verdict by Judge Abdullah al-Emady concludes a controversial case that saw Matthew and Grace Huang from Los Angeles, California, jailed for a year before being allowed to give evidence in their defence. They were granted bail in November, but ordered not to leave the country.

After the court session, Matthew Huang called the verdict “ridiculous”.

“We have just been wrongfully convicted and we feel as if we are being kidnapped by the Qatar judicial system,” he said as he read out a statement outside the courtroom.

He said the judge issued the guilty verdict to “save face”.

“They accused us of killing our daughter to harvest her organs. That’s how ridiculous this is. This verdict should be overturned immediately.”

The defence team has 15 days to appeal the verdict and vowed to do so.

The couple was arrested in the capital Doha in January 2013 after the death of their nine-year-old daughter, Gloria, who was adopted from Ghana. The Huangs have two other children, also adopted from Africa. The children were allowed to leave Qatar after several months, and are now living with family back in the United States.

Qatari prosecutors accused the couple of starving Gloria to death with the intent of selling her organs. The charge of murder comes with a potential death sentence in Qatar, though there has been an effective moratorium on executions for the last 10 years.

Qatari defence attorney Sami Abu-Sheikha discussed the verdict with the Huangs, their friends and US embassy staff outside the courtroom after the verdict was announced.

He said the prosecution had demanded a much higher sentence. “We did well. I feel it is justice, but not 100 percent justice.”

Eric Volz, from the US advocacy group David House Agency which is representing the Huangs, expressed shock at the verdict.

“The judge read literally a few sentences with no reasons given. There is a lot of confusion right now, he said.

It was unclear if the couple would have to return to prison.

Gloria’s death certificate, issued by Qatar’s Supreme Council of Health, listed the causes of death as “cachexia and dehydration”.

Lawyers for the Huangs accused the prosecutor of fabricating evidence from the autopsy, and pressed the attorney general’s office to launch an investigation. No announcement has been made on whether that is under way.

The US State Department made its first public comments on the case on Wednesday, saying it had urged the government of Qatar to ensure a fair, transparent, and expeditious trial.

“We have been concerned by indications that not all of the evidence was being weighed by the court and that cultural misunderstandings may have been leading to an unfair trial,” deputy spokesperson Marie Harf said.

The Huang family moved to Doha in 2012. Matthew Huang is an engineer who was working on a water purification project related to the 2022 football World Cup, which will be hosted in Qatar.