In first trip since attending independence celebrations in 2011, UN chief to urge both sides to end five-month conflict. 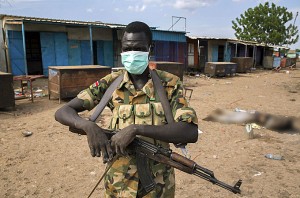 orts despite dire warnings of genocide and famine.

Tuesday’s visit, which comes as rebels and government forces battle for control of a key oil town, is the latest major push for a ceasefire in the nearly five-month-old conflict that has seen the world’s youngest nation collapse amid a brutal cycle of war crimes.

“The Secretary-General has repeatedly called on the leaders to find a political solution, and to put an immediate end to the violence which has led to the suffering of so many innocent civilians,” a report by the AFP news agency quoted a UN statement as saying.

Both sides in the conflict have been accused of widespread ethnic massacres, rape and the recruitment of thousands of child soldiers.

Ban’s arrival comes days after US Secretary of State John Kerry flew into the capital, a visit in which he extracted promises from President Salva Kiir to meet face-to-face with rebel chief Riek Machar, a former vice-president who leads the rebel forces.

But despite warnings of US sanctions if fighting continued, the government has pushed forward a major offensive to claw back towns from the rebels, capturing one of their strongholds and forcing Machar to flee into the bush.

Kerry, who had already threatened US sanctions on the warring parties, has since warned of “serious implications” unless the fighting stops.

Ban, who is scheduled to meet Kiir during his one-day visit, will also meet community leaders from the tens of thousands sheltering inside hugely overcrowded fortified UN peacekeeper bases.

The occupants are too frightened of attacks to leave the protection of the peacekeepers, even though the camps themselves have come under attack.

Ban last visited South Sudan amid euphoric celebrations at its independence from Sudan in July 2011, after it voted to split away following decades of war with Khartoum.

But as he arrived on Tuesday, battles raged around the dusty northern town of Bentiu, capital of the oil-producing Unity state, four days after government troops moved to wrest back control.

The war has claimed thousands, and possibly tens of thousands, of lives, with at least 1.2 million people forced to flee their homes.(AFP)