After days of hectic lobbying and bargaining the ICC board settled for a period of consultation and discussion over a set of principles which, if approved, will grant the BCCI, the ECB and CA a bigger share of cricket’s global revenues and a bigger control of the game’s governance.

An ICC press release announced a set of principles which were described as “unanimously supported.” There were concessions granted to the other seven member nations, in the shape of the abolition of the two-tier concept which would have relegated Bangladesh and Zimbabwe to the lower division, the expansion of the proposed Executive Committee from four to five and money from a newly-created Test Match Fund expanded to include South Africa, unlike in the draft proposal which had left them out. 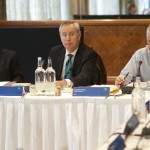 The draft proposals, put together by a working group of the Financial & Commercial Affairs committee of the ICC, were not put to vote following resolute opposition from a group of members who insisted on further deliberations. Hours after the ICC’s press release, four boards sought to clarify their stance in the light of the statement about “unanimous support” for the principles. One official, representing one of the other seven boards, said the term “unanimous” support was a “misleading” one. “We were offered amended terms and we will take them back to our Board and discuss it – there is nothing more to our position.”

One of the principles that took a clear stance on how the revamp of the ICC’s administrative structure was to go, stated that key positions in the ICC would be held for a two-year period starting in June 2014 due to the “transitional period that includes a new governance structure and media rights cycle.” The two years terms for the positions were divided as follows: the chairman of the ICC would belong to the BCCI, a Cricket Australia representative would chair the Executive Committee, and an ECB official would head the Financial & Commercial Affairs committee.

The list of principles presented during the meeting for discussion covered each of the five “resolution” areas originally meant to be distributed among the seven member nations. These included the introduction of “meritocracy, a reworking of the FTP, the ICC’s corporate structure, constitutional amendments, as well as changes in governance.”

The first sign of any opposition to the “position paper” came late on Monday, when the PCB, CSA and SLC asked for a deferral of the proposals, after which the BCB became the first board to formally communicate to the ICC on Tuesday that it was “against” the proposal.

According to one insider, none of the Big Three pressed for voting, “since they knew that a vote wouldn’t be feasible. The next round of negotiations, read bargaining, begins now.” A follow-up meeting will be held to discuss the proposals again next month.

A few hours after the ICC sent its press release, the PCB issued a statement saying, “no decision with regard to any proposed changes as per the Position Paper submitted by BCCI, CA and ECB have been made in today’s ICC Board meeting. The PCB clearly stated at the meeting that the guiding principles were subject to PCB’s Governing Board’s approval. These matters will be placed before the BOG (board of governors) and thereafter PCB will take its position at the next ICC Board meeting.”

CSA also sent out a release to “clarify” the ICC’s statement, and said its board would meet soon to discuss the principles. “The support is subject to the approval of the respective Boards of the member countries after which a final decision will be taken at a follow-up ICC Board meeting on February 8,” the release said.

In a statement from the BCB, acting CEO Nizamuddin Chowdhary said, “We have communicated to the ICC Board that the BCB will not endorse any proposal that compromises Bangladesh’s full member rights in terms of status and participation. We respect the views of the member countries who have expressed similar sentiments.”*

Sri Lanka Cricket’s statement followed shortly after, which said, that at the meeting, “revised position papers were forwarded taking in to deliberation the concerns faced by the member nations, for the consideration of ICC as opposed to the original position paper circulated among the full member nations.” SLC president, Jayantha Dharmadasa, it said, had “informed the ICC (of) the need for further discussions on the matter pertaining to the revised position papers with the (SLC’s) Executive Committee prior to arriving at a decision in this regard.”

Another official from one of the seven boards was pleased a final decision was deferred. “It is a big thing that we managed to have the resolution to not go through.”

The ICC sought to redress the impression that there was a contradiction between its statements and those of the dissenting boards. Its procedures mean that the distance to be covered between a set of agreed principles turning into actions can be considerable.

The ICC press release quoted president Alan Isaac as saying, “there is more work to be done by the Members in developing their schedules of bilateral cricket while at the ICC we need to work through the detail of the manner in which these principles will be implemented … Extensive work will now be undertaken in advance of a follow-up Board meeting next month.”

Isaac was hopeful that an agreement could be reached soon. “The principles agreed today provide clear evidence that through the course of further discussions over the coming weeks we can be increasingly confident in achieving consensus.”