UN Commissioner for Human Rights says atrocities committed include the decapitation of children and cannibalism. 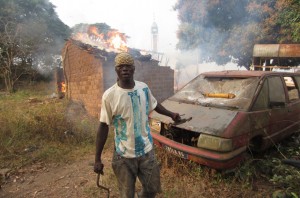 Hatred between Christians and Muslims in Central African Republic has reached a “terrifying level”, a senior United Nations official has said, with atrocities including the decapitation of children and cannibalism.

Navi Pillay, the UN High Commissioner for Human Rights, said on Thursday that there was “almost total impunity” with regards to acts of violence and she appealed for the deployment of more troops to tackle thebloodshed.

Pillay told reporters at a news conference in Bangui: “The inter-communal hatred remains at a terrifying level, as evidenced by the extraordinarily vicious nature of the killings. There is … almost total impunity: no justice, no law and order apart from that provided by foreign troops.”

The former French colony was thrown into chaos after rebels from the mainly Muslim Seleka group seized power in a March 2013 coup, after which some mounted a campaign of abuses, prompting the formation of Christian-dominated vigilante groups.

“People apprehended with blood on their machetes and severed body parts in their hands have been allowed to go free because there is nowhere to detain them and no means to charge them with the crimes they have clearly committed,” Pillay said.

The UN estimates about 650,000 people have been displaced within CAR, while nearly 300,000 have fled to neighbouring states. UN agencies have reported a rise in rape and sexual violence in refugee camps.

Pillay urged donors to provide funding for a $551m humanitarian appeal, which she said was only one-fifth financed, warning that the international community should learn from crises in the Balkans and Rwanda.

“If we get it wrong again, by failing to support this country wholeheartedly in its time of need, we risk decades of instability and the creation of a new and fertile breeding ground for religious extremism, not just in CAR but in the wider region.

Pillay was on a two-day visit, during which she met Catherine Samba-Panza, the country’s interim president, who took office after Michel Djotodia resigned in January.