Civilians are increasingly caught in the crossfire of civil war as the army marches on rebel-held Donetsk.

Ukraine’s military has urged pro-Russia separatists to allow civilians to flee cities in the country’s besieged east as fears of a humanitarian crisis continue to grow. 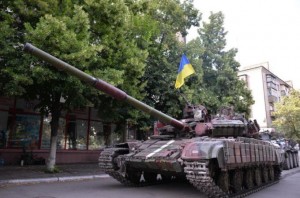 The army is continuing its advance on the main rebel-held city of Donetsk, which it has been closing in on since the end of a ceasefire at the start of July.

“The seizure of the town allowed for the encirclement of Donetsk from the north and the closing down of an important channel for the supply of weapons and technology to the terrorists.”

He hinted that preparations for an offensive on the city were under way, but gave no more details.

Under the advance of the military, the civilian death toll in the conflict has passed 800, with thousands more wounded.

“Pro-Russian insurgents’ attacks on medical units and personnel are putting sick and vulnerable people and those who care for them at risk,” Yulia Gorbunova, Europe and Central Asia researcher at HRW, said in a statement.

“This appalling disregard of people who are sick or wounded can be deadly and needs to stop immediately.”

An earlier HRW report criticised the use of unguided rockets on both sides, especially in heavily populated areas.

“The use of indiscriminate rockets in populated areas violates international humanitarian law, or the laws of war, and may amount to war crimes,” the report said.

“If insurgent and Ukrainian government forces are serious about limiting harm to civilians, they should both immediately stop using these weapons in populated areas,” said Ole Solvang, senior emergencies researcher for the group.

Government forces have made major gains in the east over the past month, and have said they are close to cutting off fighters in Donetsk from the Russian border and their comrades in Luhansk, the rebels’ second largest stronghold.

Ukrainian troops continued to come under fire, however, with Luhansk saying five soldiers had been killed and 14 more injured in recent days.

More than three months of civil war have already claimed more than 1,150 lives.

Kiev on Monday also reported it was negotiating for the return of some 300 troops who were forced to retreat into Russia after hours of missile and mortar bombardment from across the border.

Russia’s security service said border guards had allowed the Ukrainians to cross after they agreed to give up their weapons.

The military advances against pro-Moscow separatists came as more remains from the downed MH17 plane were flown to the Netherlands for identification, and Malaysian experts joined the Dutch and Australian probe at the site of the July 17 crash.