U.N. Secretary-General Ban Ki-moon warned international leaders on Monday that the Ukraine crisis could have profound implications for the integrity of a global treaty designed to prevent the spread of nuclear weapons. 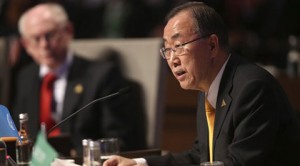 Ukraine gave up its Soviet-era nuclear arsenal under the 1994 Budapest Memorandum, which it signed together with Britain, United States and Russia. It provided guarantees of Ukraine’s sovereignty in exchange for a commitment, since fulfilled, to give up the country’s nuclear weapons.

Russia, however, has seized and annexed Ukraine’s Russian-majority region of Crimea following the fall in February of Ukraine’s pro-Russian president after months of mass protests.

On Monday, Ukraine told its remaining troops to leave Crimea after Russian forces overran one of Kiev’s last bases in the Black Sea region. Ban’s comments suggested concern that events in Ukraine could make some countries more reluctant to give up any nuclear weapons capabilities, or tempt others to pursue them.

Addressing a nuclear security summit in The Hague, Ban said security assurances were an essential condition for Ukraine’s accession two decades ago to the nuclear Non-Proliferation Treaty (NPT), the 1970, 189-nation anti-nuclear weapons pact.

“However, the credibility of the assurances given to Ukraine in the Budapest Memorandum of 1994 has been seriously undermined by recent events,” he told leaders from 53 countries, including U.S. President Barack Obama and Russian Foreign Minister Sergei Lavrov.

“The implications are profound, both for regional security and the integrity of the nuclear non-proliferation regime,” Ban said. But, “this should not serve as an excuse to pursue nuclear weapons, which will only increase insecurity and isolation.”

Kenneth Brill, a former U.S. envoy to the U.N. nuclear agency, said the United States in the past had “extended its nuclear umbrella in large part to keep those under it from seeking weapons of their own”.

“These are security assurances of a kind and while not once Ban Ki-moon would refer to directly or clearly, at least, in the background of his statement,” Brill said in an email.