Deadly artillery fire in Mariupol and attacks in Donetsk raise fears that ceasefire agreed on Friday could collapse.

Shelling and other clashes between government forces and pro-Russian separatists have thrown the ceasefire agreement in eastern Ukraine into deepening peril, two days after it took hold. 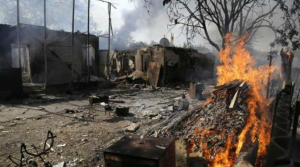 There was continued shelling throughout Sunday around the port city of Mariupol, after a civilian was killed overnight. Local officials said the woman died when rebels bombarded a government-held checkpoint on the eastern edge of the city.

Artillery fire was also heard near Donetsk, the main rebel-held city. At least two houses were set ablaze by shells in the rural village of Spartak, just north of Donetsk and adjacent to the airport.

A man whose house was struck told the Associated Press that rebels had fired from a spot nearby, and that apparently provoked a retaliatory attack from Ukrainian government troops.

Blasts powerful enough to be heard in Donetsk’s center appeared to be coming from the direction of the airport early on Sunday morning. The government-held terminal, which has been reduced to little more than a burned-out shell, has been under unremitting attack from separatist forces for months.

The people of Mariupol and Dontesk who hoped the ceasefire would bring a respite from months of crossfire were left badly disappointed.

The ceasefire – signed on Friday by Ukraine, Russia and the rebels after five months of fighting that killed at least 2,600 civilians and forced hundreds of thousands flee from their homes – had appeared to be holding for much of the day on Saturday, but shelling started late at night.

The 12-point agreement calls for the withdrawal of all heavy weaponry, the release of all prisoners and the delivery of humanitarian aid to devastated cities in eastern Ukraine.

The truce also obliges Kiev to give greater powers to the separatist Donetsk and Luhansk regions and calls for local elections to be held in those Russian-speaking areas.

The rebels recently opened a new front on the coast in what many Ukrainians fear is an attempt to secure a land corridor between Russia and the Crimean Peninsula, which Russia annexed in March.

Amnesty International on Sunday said all sides had shown disregard for civilian lives and were violating international obligations.

The group published satellite images it said showed Russian weaponry being brought into Ukraine, which secretary-general Salil Shetty said were proof that the conflict was international.

EU leaders plan to put further pressure on Russia over its alleged support for the rebels by approving fresh sanctions on Monday on its defense and oil companies.