Fifteen bodies recovered from site of rocket attack on convoy of fleeing refugees near Luhansk in eastern Ukraine.

Fifteen bodies have so far been recovered from the site of Monday’s rocket strike on a refugee convoy of buses and cars in eastern Ukraine, a military has spokesman said.

“By 7pm last night we retrieved 15 bodies … The search continued into the night and is continuing today,” the spokesman, Andriy Lysenko, told Reuters news agency on Tuesday. 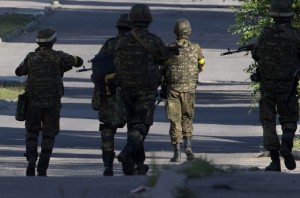 The attack occurred near the eastern Ukraine city of Luhansk, close to the border with Russia.

About 500 people a day have been fleeing Luhansk, which has borne the brunt of intense fighting between government forces and pro-Russian separatists, as it has been used as a rebel stronghold for much of the conflict.

The Kiev military blamed the attack on the rebels, but they have denied responsibility.

At least one rebel leader suggested no attack had occurred.

The military said on Monday that many of those killed, including women and children, had been burned beyond recognition.

Many bodies had been blown apart by the blast.

The US State Department condemned the attack on the convoy, which was near an area of heavy fighting between Khryashchuvatye and Novosvitlivka, but said it could not confirm who was responsible.

“We strongly condemn the shelling and rocketing of a convoy that was bearing internally displaced persons in Luhansk… Sadly, they were trying to get away from the fighting and instead became victims of it,” State Department spokeswoman Marie Harf told a news briefing in Washington.

Ukrainian government forces have been fighting separatists for four months in the Russian-speaking east of Ukraine.

The rebels have set up “people’s republics” and said they want to join Russia.

Ukraine says Russia, which seized the Crimean peninsula in March after a pro-Western government took power in Kiev, orchestrated the uprisings and is arming the rebels with tanks, missiles and other heavy weaponry. Moscow denies this.

“We have repeatedly said that Russia is not an advocate of the sanctions rhetoric and did not initiate it,” President Vladimir Putin’s spokesman Dmitry Peskov said on Tuesday.

“But in the event that our partners continue the unconstructive and even destructive practices, additional measures are being worked out.”