Lawmakers in Britain have approved a motion allowing the country to join the US-led coalition in bombing Islamic State of Iraq and the Levant (ISIL) targets in Iraq.

The motion was approved on Friday by 524 votes to 43 following hours of animated debate in the House of Commons. 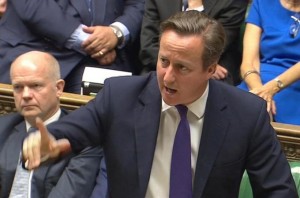 Prior to the vote, Prime Minister David Cameron made an impassioned plea for Britain to join the United States and a coalition of Western and Arab nations in air strikes meant to thwart the ISIL group in Iraq.

Cameron told a tense House of Commons that there was no more serious issue than asking the country to devote armed forces to conflict.

He repeatedly stressed that no combat troops were planned, but he could barely get through his statement, as lawmakers peppered him with questions about the move.

“ISIL is a terrorist organisation unlike those we have dealt with before. Their brutality is staggering: beheadings, crucifixions, the gouging out of eyes, the use of rape as a weapon, the slaughter of children, all these things belong to the dark ages,” said Cameron.

“But it is not just the brutality, it is backed by billions of dollars and has captured an arsenal of the most modern weapons,” he added.

The British leader also said a strategy was needed to deal with the radicalisation of young people in Europe.

“Young people have left our country to go and fight with these extremists. We must take action at home, but we must also have a comprehensive strategy to defeat these extremists abroad,” he said.

British involvement in Iraq was expected and UK fighter jets had carried out reconnaissance over the country in the past few days.

The beheading of a British journalist by the ISIL last month had swayed the public into supporting UK’s intervention in Iraq, Phillips said.

The motion does not address any action in Syria. Critics say that would be illegal because Syrian President Bashar al-Assad has not invited outsiders to help.

Foreign Secretary Philip Hammond refused to speculate on how long the military campaign could last, but lawmakers envision a long-term action.

Meanwhile, the Danish government announced on Friday it was joining the coalition to strike at ISIL fighters, sending seven F-16 fighter jets to take part in airstrikes against the group in Iraq.