Migrants from India are trying to return home as job opportunities dry up and government regulations get tougher.

London, UK – As rain lashes the front of a Sikh temple on the outskirts of east London, groups of migrants, mostly from Punjab in northern India, emerge from their temporary shelters of railway arches, car parks and motorway underpasses. 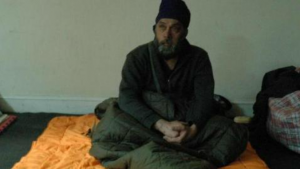 The rain has soaked their blankets and they need a place to sleep. On nights when the rain makes it impossible to sleep, a few lucky men get space in a local Sikh temple, known as a Gurdwara.

As they roll their sleeping bags onto mats, a shout goes out for help over a scuffle that has broken out at the front gates. Two drunken men have tried to force their way in, but the Sikh custom prevents anyone under the influence of alcohol from entering.

Many of these people risked their lives to get to London, enduring a brutal journey through Russia, forced marches across Ukraine’s border and days lying in sweaty, metal containers or welded beneath the seats of buses.

Life here, they thought, would mean security, wealth, the option to travel and money for their families at home.

Now a government crackdown on illegal labour and a raft of measures proposed by UK Home Secretary Theresa May to make “Britain a harder place to live for those who have no right to be here”, has meant the demand for unskilled workers in this part of London has dropped to nearly zero.

Ilford was a borough where throngs of men would line the high road each morning, waiting for vans to come and pick them up. Now, only the determined remain, scrambling to jump into vans and work for another day gutting houses or stripping roofing tiles.

Bhupinder Singh sips from a metal cup of steaming chai as he prepares to sleep. He left his wife and two children in Kapurthala 10 years ago,. eventually joining the marginalised community of undocumented migrants in the UK after hop-skipping his way through Europe.

When he arrived, a day’s work would earn Singh as much as £40 ($67). But over the past three years, he says that amount dropped steadily to £30 ($50) and then £20 ($33) as the Asian migrant community vied with Eastern Europeans for places in vans that would pick them up along Ilford road.

He was pushed from temporary shelter onto the streets and now, rather than waiting for labour, he spends his days walking for hours between Gurdwaras that he knows will serve him free food.

Nearly two years ago, Singh decided he wanted to go home. He walked into the offices of the UK Border Agency to provide his fingerprints and begin his application for a process known as Assisted Voluntary Return or AVR.

The scheme was touted as a quick-fix solution for getting rid of unwanted immigrants, whereby applicants sign a form, are issued travel documents and sent home on flights bought for them by the Home Office.

Twenty months later, Singh is still waiting to find out when he will become eligible to return. Meanwhile, he sleeps alongside three others, beneath shopping trolleys, in the car park of a supermarket.

Like hundreds of other migrants, he destroyed his passport in the belief it would make it harder for authorities to forcefully deport him. “I am stuck here,” the 54 year-old says. “If only I had my passport I would sleep at the airport until they let me go home.”

The hardship and desperation of sleeping on cold cement have left him helpless and confused. “If all the seats on my plane home are full I don’t mind, I will stand on the plane all the way home.”

“Bhupinder is not alone. There are many, many others who also hope to return home but cannot,” said Rita Chadha of RAMFEL, the Refugee and Migrants Association of East London.

From her office, Chadha can see rows of hooded men on Ilford High Road milling around waiting for work. The tortuous task she has volunteered herself for is guiding individuals through the process of applying for the AVR programme.

“The migrants are stuck in a bureaucratic loop. They are frustrated by the system and people don’t understand what the blockages are.”

She knows 20 men who have made their applications to AVR, and all of them destroyed their passports under orders from their traffickers, or they simply lost them from so many nights sleeping rough.

While it takes Malaysian or Congolese nationals only eight weeks to be issued with emergency travel documents, the process at the Indian High Commission can take years because of the slow process. Al Jazeera tried to contact the Indian embassy but they did not respond to requests.

According to Home Office statistics, Indian nationals accounted for the highest number of voluntary departures, 7,228 in 2013 alone, an 11 percent increase over the previous year.

But these figures are based on successful cases. Estimating the number of people currently embroiled in the AVR programme is nearly impossible, since, essentially, they do not exist. There is no record of migrants entering the UK and once inside they live invisible lives, surrounded by a shadowy world of exploitation, as faujis, a Punjabi term literally meaning “foot soldiers”.

A spokesman from the Home Office said his office was “working closely with other governments to ensure people wanting to leave can do so “as quickly as possible”.

“Where an individual frustrates the process or has destroyed their identity documents, it can take time to obtain an Emergency Travel Document, and to verify who they are,” he said.

The implications are clear. With thousands of cases like Singh’s, British laws hardening towards immigrants, and the growing popularity of the far-right, anti-immigrant UKIP party, the need for dialogue between the governments of Britain and India has never been more apparent.