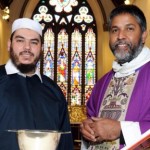 An Episcopalian priest has made headlines in the UK and India by opening the doors of his Scottish church to Muslims for prayer.

The Rev Isaac Poobalan allowed Muslims to use St John’s church in Aberdeen for prayer after he saw worshippers praying “on a bitterly cold day” outside a nearby mosque because it was too small to accommodate them.

Up to 100 Muslims now pray in the main chapel at St John’s every Friday – and the church hall is being converted for the exclusive use of Muslims.

“The mosque is in fact in a former diocesan office in the church grounds which was sold by the diocese to a Muslim businessman. He opened it as a mosque but it only holds about 50 worshippers,” Poobalan told ucanews.com.

The opening of the church has featured in The Guardian, Daily Mail and The Sun in the UK and the Indian Express and Times of India.

Poobalan, 50, grew up in Vellore, Tamil Nadu, and his father was a member of the chaplaincy team at Christian Medical College Vellore Hospital.

“I saw people from all religions praying in the hospital chapel,” he said. “It taught me that prayer transcends religion. We all pray to essentially the same God.”

He said Secular India, an “educational resource” devoted to the pledge in the Indian constitution that all faiths are equal, also had a hand in teaching him “to look at every religion with equal respect.”

Poobalan trained as a nurse specializing in mental health and worked in Abu Dhabi before studying for the Episcopalian priesthood in Edinburgh, Scotland.

Married to a doctor who trained at CMC and with two children, he has been rector at St John’s for 11 years and for some time has been involved in forging links with other religious communities in Aberdeen.

“When I first arrived,” he said, “there were very few people of other religions in Aberdeen, mostly students. But many more have arrived over the years, working for the National Health Service and the oil industry.”

He is also chaplain of Robert Gordon University, Aberdeen, and chairman of the Friends of Vellore Scotland, a charity that supports the work of CMC Vellore.

It is believed this is the first time a church in the UK has been opened to Muslims for prayer, though it is occasionally done in the United States.