Local groups in the UAE are reviving the ancient tradition of pearl diving, once an economic pillar in the region.

Dubai, United Arab Emirates – “Heritage is our foundation,” said Ali Saqr al-Suweidi, pulling a red handkerchief out of his pocket to reveal a small handful of milky pearls, “and our heritage is the sea.”

The descendant of Emirati pearl divers, 58-year-old al-Suweidi – or Major Ali, as he prefers to be called – has been sailing in the Gulf since he was eight, and searching its waters for riches since he was a teenager. 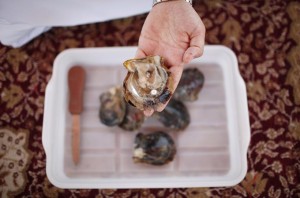 Today, he is president of the Emirates Marine Environmental Group (EMEG), a non-profit organization devoted to the study and protection of the UAE’s aquatic treasures. The group regularly organizes pearl diving expeditions for locals and foreigners alike, determined to keep this now-neglected tradition alive.

“There is this story my grandfather used to tell me about a diver who brought a sheikh onboard to pray for pearls. For three months they prayed and no pearls came. The diver eventually dismissed the sheikh and, soon after, he found a huge pearl,” al-Suweidi told sources, recounting one of the many tales set amid the UAE’s historic pearl trade.

“He gave it to the captain who recited a prayer and cast it out to sea, saying it was cursed because the diver discovered it after abandoning the sheikh. Later, the cook found it in the belly of a fish he was preparing for dinner.”

Practiced by the inhabitants of the Arabian Gulf for a millennia, pearl diving was the mainstay of the region’s economies prior to the discovery of oil. Gulf merchants traded with counterparts from Zanzibar, France, India, England, Iraq, Iran and even the United States, bartering pearls for other goods like wood, or selling them in the luxury market. Some accumulated great wealth through the industry, but for most it served as their only means of livelihood.

At the turn of the 20th century, during the pearl industry’s prime, it employed around 80,000 people, and thousands of fleets would set sail from the region between June and September. Divers would approach a captain to request a spot on his ship, he would loan money to their families, and they would spend three months hunting for pearls with which to pay off their debt.

The discovery of oil, along with the development of cultured pearls by the Japanese during the 1940s, brought about the demise of the pearl trade. Former crew members sought out work in other marine industries like fishing, began trading alternative goods or opened up small businesses with their savings.

Today, little attention is paid to the dwindling generation of retired pearl divers and their now obsolete occupation. “I feel like a lot of people don’t know about pearl diving culture and their own history, and to not know where you come from is dangerous,” al-Mulaifi told media.

Still, some descendants of the UAE’s pearl divers and a few capable divers like Faraj Butti al-Muhairbi, chairman of the Emirates Diving Association (EDA), who is now in his late 70s, have taken it upon themselves to organism public pearl diving excursions.

“Surviving divers like Faraj still meet in these fishermen’s majalis [common meeting areas] on the beach. They discuss the fish they caught and the state of the sea, and reminisce over the number of dhows [Arabian ships] that used to sail in their fleets. Their lives still revolve around the sea,” explained Ibrahim Al Zu’bi, executive director of the EDA.

“We used to be such doers of things and had this fix-it-yourself attitude. These are important values and privilege has erased a lot of that need to get things done. We might not need to build boats any more, but there is a spiritual value in the way people lived in the past,” al-Mulaifi added.

Similarly, al-Suweidi said the culture of pearl diving can only be communicated and passed on through experience, adding that he wanted the younger generation of Emiratis to understand the challenges and camaraderie that their ancestors shared in the trade.

These lessons, he said, constitute the “foundations” of Emirati culture.

Pearl diving may now be a bygone industry in the UAE, but its ethos continues to be cherished by many both in the country and the wider Gulf region, including those who are attempting to teach younger generations how to maintain the cultural disposition it once enabled.

“Learning about pearl diving through books is intellectually useful,” said al-Mulaifi, “but you also have to experience it through your body. You have to inhabit that disposition. Some things you can only learn by doing.”

In a similar spirit, Freediving UAE, an organization co-founded by the UAE national free diving champion Adel Abu Haliqa and his peer Alex Boulting, is currently recruiting young Emiratis to learn how to free dive to 60m in just six months.

“The UAE is the home of free diving,” Boulting commented. “I understand why pearl diving stopped. It was there to bring in money and as soon as it wasn’t generating it any more, why would you do it? It was a tough life.”

But diving free of equipment, he continued, “is the most serene way to explore the underwater world, and it is a part of the fabric of Emirate culture. The essence of this project is to put this practice back at the center of national heritage.”

So far, nearly 40 people have applied to the programme. “It’s my dream to dive professionally,” said 27-year-old applicant Saeed Alhammadi, a fisherman from Abu Dhabi. “I was born and raised on an island. I’ve had a relationship with the sea my whole life. All countries have a message to pass on to their youth – ours is diving.”