LAHORE: At least twelve people were killed when the roof of a mosque collapsed in the Droghawala area here on Tuesday. 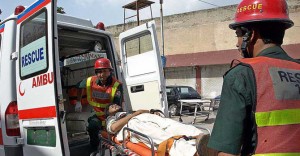 A spokesman for Rescue 1122 told Tribunes’ International correspondent that the incident took place when Zuhr prayers were being offered in a mosque near Daroghawala, adding that rescuers had started relief work with the cooperation of locals.

He said that more people were feared trapped under the rubble and rescue teams were trying to remove the debris.

The injured people have been shifted to nearby hospitals including the Services Hospital while the bodies were taken to the Mayo Hospital.