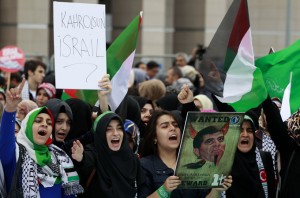 Jerusalem – A ruling issued by an Istanbul court earlier this week seemed at first like another serious setback for the long-delayed effort to mend ties between Turkey and Israel.

Ankara downgraded relations with its onetime ally after Israeli commandos launched a deadly raid on a Gaza-bound aid flotilla in 2010, killing 10 people, most of them Turkish citizens. The two countries have been negotiating a reconciliation deal for months and reports last week said it was nearly complete.

On Monday, though, a criminal court in Istanbul ordered the arrest of four retired Israeli military officers, including General Gabi Ashkenazi, the former chief of staff, and General Amos Yadlin, the former head of military intelligence. All four held senior posts at the time of the raid; prosecutors are seeking multiple life sentences.

The ruling prompted an angry reaction from Israeli officials, who described it with terms like “ridiculous provocation”, and warned that it could jeopardise the talks.

Yet the ruling will only become significant if Interpol agrees to issue arrest warrants for the four officers, which it may well decline to do. Domestic politics may continue to delay an agreement, but analysts and diplomats say both sides have strong economic and political incentives to reconcile.

“We should separate the process of political normalisation from the courts,” said Oguz Celikkol, who was Turkey’s ambassador to Israel at the time of the raid. “The Turkish government is serious about this agreement. That’s why they’ve spent the past three years discussing it.”

Ankara was Israel’s closest majority-Muslim ally throughout much of the 1990s and 2000s. The two had extensive military relations, with Israeli pilots training in Turkish airspace and companies signing billions of dollars in arms deals.

Turkish Prime Minister Recep Tayyip Erdogan, today seen by many Israelis as implacably hostile, made a friendly visit to Jerusalem in 2005 with a large delegation of businessmen. He offered to serve as a negotiator with the Palestinians, and laid a wreath at Yad Vashem, the Holocaust memorial.

The first rupture came in January 2009, amid the three-week Israeli war in Gaza. Erdogan was a sharp critic of the offensive, which killed more than 1,400 Palestinians, most of them civilians. Days after the war ended, the prime minister stormed off the stage at the World Economic Forum in Davos after an angry exchange with Israeli President Shimon Peres.

A year of symbolic slights followed, including the infamous “low chair” incident. Celikkol was summoned to a meeting with Israel’s then-deputy foreign minister, Danny Ayalon, who wanted to complain about a Turkish television programme’s negative portrayal of Israeli soldiers. He seated Celikkol in a low chair, behind a table without a Turkish flag, and told a news crew to film the breaches of protocol.

But it was the flotilla raid in May 2010 that provided the final break. Nine people were killed during the attack; eight were Turkish citizens, and the ninth an American of Turkish descent. (A tenth victim, Ugur Suleyman Soylemez, died earlier this month after being in a coma for four years.) Turkey immediately recalled its ambassador from Tel Aviv, and later downgraded diplomatic relations and suspended military cooperation with Israel.