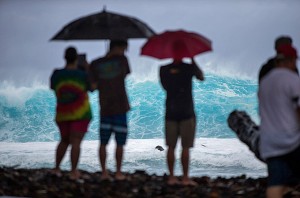 knocking down trees and causing power outages, the first of two major storms due to hit the archipelago as the more powerful Hurricane Julio gathered steam behind it.

More than 1,200 people flocked to evacuation shelters across the Big Island, according to the County of Hawaii Civil Defence, as heavy rains and strong winds pummeled areas of East Hawaii from the Puna area to the town of Hilo.

Hawaii Electric Light Company had about 5,000 customers without power, mostly in East Hawaii, a Hawaii County official said on Friday.

With its eye still about 80km south of Hilo, on the Big island, Iselle had weakened from a hurricane to a tropical storm, packing maximum sustained winds near 110kph, the US Central Pacific Hurricane Centre said in a statement about an hour before midnight on Thursday.

The storm could still bring waves of up to 7.5m on southeast-facing shores on the Big Island over the next few hours before passing south of the state’s smaller islands on Friday, Central Pacific Hurricane Centre meteorologist Tom Evans said.

That hurricane was upgraded late on Thursday to a Category 3 storm, with maximum sustained winds increasing to near 190kph, the National Hurricane Center said. It was expected to weaken on Saturday.

In anticipation of the rare back-to-back storms, Hawaii residents scrambled to stock up on supplies as state officials warned of the potential for flash floods, mudslides and power outages in the normally calm tourist haven.

Governor Neil Abercrombie signed an emergency proclamation freeing up funds and resources and authorities advised residents to prepare seven-day disaster supply kits and cautioned them against driving except in an emergency.

“Everybody knows that a real rough time is coming,” Abercrombie told a news conference.

Hawaii’s schools would be closed on Friday, but authorities planned to keep airports open so planes could land in an emergency although some airlines had cancelled flights, officials said.

Malia Baron, an Oahu resident visiting the Big Island, known for its volcanoes, black-sand beaches and coffee farms, reported the weather as blustery late on Thursday.

“Our power is out again. It’s been on and off all evening and we were lucky enough to finish cooking before one of the longer outages,” she said.