More than 3,000 New South Wales public servants will be relocated to new offices in Sydney’s west and south-west. 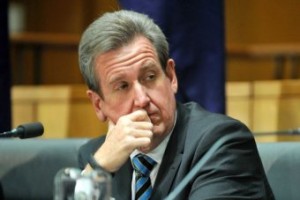 The Community Relations Commission and divisions within the Department of Family and Community Services will move from the CBD and Ashfield to Liverpool.

The Ambulance Service of NSW will relocated from Rozelle to North Parramatta.

The Office of Environment and Heritage and the Office of State Revenue will be co-located in Parramatta.

Sport and Recreation is moving from Olympic Park to Penrith.

Premier Barry O’Farrell says the changes will ensure that public servants are based in the communities they serve and also boost the region’s economy.

“This is about giving people the option of working closer to home but importantly it’s also about ensuring that public servants are making decisions about services in areas where those services are relied upon,” he said.

“We absolutely believe that local decisions are the best decisions because people have to live with the results of them.”

The union representing Government workers, the Public Sector Association (PSA), says it was not consulted about the decision.

“The first we heard was today in the media so it’s a hard for us to have a particularly positive view when we don’t know how the decision was made,” she said.

“We haven’t seen a business case for any of the decisions and we don’t know what impact that’s going to have on individual staff and the services they provide.

“We’d like to think that there’s going to be some sort of flexibililty in assisting those members who are going to find the move difficult.”

Government ‘not doing enough’ to create jobs in region

Opposition Leader John Robertson, who holds the western Sydney seat of Blacktown, says the Government is not doing enough to create new jobs in the region.

“One thing the Premier could do is come out and announce his support for a second airport in Sydney, which will be a catalyst to transform Western Sydney and create thousands of jobs,” Mr Robertson said.

“Have a look at Sydney Water. It moved out here and it’s a far more productive environment and in fact it changed the whole work culture,” Mr Borger said.

“I think that there have been some poor decisions around Government office relocations. When local government moved to Nowra they lost apparently 90 per cent of all of their staff.

“When Sydney Water moved to Parramatta they kept 95 per cent of all of their staff.”

Mr Borger, a former Labor government minister, says he does not agree with Opposition criticism that the announcement has taken too long.

“I can tell you that the cities of western Sydney will be holding the Premier to account to make sure that it does happen but I think it has been made in good faith and it is a very good decision,” he said.

“We’ve heard about the decade of decentralisation for a while now. I don’t think it matters that the decision wasn’t made until now, what matters is that it has been made.”