General says administration made up of political rivals to be assembled by September, but no polls until country stable.

The leader of Thailand’s military government has said that an interim government will be set up by September but warned that elections will only take place once the country is stable. 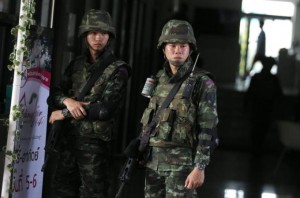 Army commander General Prayuth Chan-ocha said a temporary constitution would be drafted and the interim government would include rivals from the country’s long-running political conflict.

A reform council would then be formed to institute political reforms in the deeply divided country, the general told a meeting of civil servants on Friday.

The comments offered the most specific timeline on a possible transfer of power after last month’s bloodless coup, the AP news agency reported.

The army seized power on May 22, overthrowing a government elected by a majority of voters three years ago.

Chan-ocha has justified the coup as a necessary action to restore order after half a year of anti-government protests and political turmoil that left at least 28 people dead and the government paralysed.

Since taking power, the army appears to be carrying on the fight of the anti-government protesters by mapping out a similar agenda to redraft the constitution and institute political reforms before elections.

It has also gone after politicians from the grassroots “Red Shirt” movement that had pledged to take action if there was a coup.

On Thursday, a military court extended the detention of prominent activist Sombat Boonngam-anong for an additional 12 days.

He has been held without charge since his arrest on June 5, but has been informed that under martial law he faces up to 14 years in prison on possible charges of inciting unrest, violating cyberlaws and defying the military government’s orders.

Sombat had spearheaded an online campaign calling for people to raise a three-finger salute borrowed from “The Hunger Games” film to show opposition to the coup.